This is a printer version of an UnderwaterTimes.com article.
To view the article online, visit: http://www.underwatertimes.com/news.php?article_id=39467210581 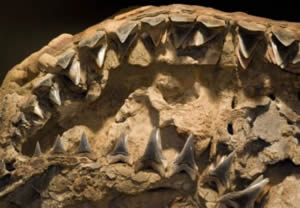 This well-preserved fossil is the only intact partial skull ever found of a white shark that lived 5 million years ago. Photo by: Jeff Gage 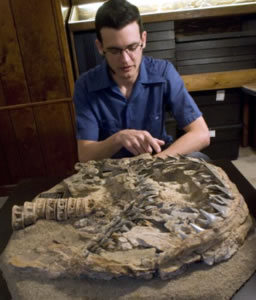 Dana Ehret, is seen here with the shark fossil in the study at Gordon Hubbell’s private gallery. Photo by: Jeff Gage

GAINSVILLE, Florida -- A new University of Florida study could help resolve a long-standing debate in shark paleontology: From which line of species did the modern great white shark evolve?

For the last 150 years, some paleontologists have concluded the great white shark, Carcharodon carcharias, is a smaller relative of the line that produced Carcharodon megalodon, the largest carnivorous fish known. Other paleontologists disagree, arguing the great white shark evolved instead from the broad-toothed mako shark. The second group contends megalodon, which grew to a length of 60 feet, should have its genus name switched to Carcharocles to reflect its different ancestry.

The study in the March 12 issue of the Journal of Vertebrate Paleontology falls squarely into the mako camp. It concludes megalodon and modern white sharks are much more distantly related than paleontologists initially believed.

"I think that this specimen will clarify things," said lead author Dana Ehret, a vertebrate paleontology graduate student at the Florida Museum of Natural History located on the UF campus. "When we only have isolated teeth to describe, it's very hard to come to a definitive conclusion."

The study is based on a remarkably well preserved 4- to 5-million-year-old fossil from Peru of an early white shark species: a complete jaw with 222 teeth intact and 45 vertebrae. Most ancient shark species are known only from isolated teeth. Based on tooth size and analysis of growth rings within the vertebrae, the shark was about 20 years old and 17 to 18 feet long, a size in the range of modern white sharks.

Having the teeth in place allows researchers to see important distinguishing characteristics that help determine a fossil's genus and species, such as whether a tooth curves toward the outside of the jaw or its midline, Ehret said. He believes the fossil belongs to a white shark species closely related to Isurus hastalis, a broad-toothed mako shark that probably grew to 27 feet long and lived 9 million to 10 million years ago.

An olive-grove farmer trained in fossil collection discovered it near his home in the desert of southern Peru in 1988. It now belongs to a private collection and was only recently pledged to the Florida Museum of Natural History.

"It's the only fossilized partial skull of a white shark that's ever been found," said Gordon Hubbell, the fossil's owner and study co-author.

Hubbell purchased the fossil from the farmer during his first trip to Peru, which coincidentally occurred only a few days after the discovery.

The specimen came from an area known as the Pisco Formation, famous for its rich fossil beds dating from the late Miocene to Pleistocene, about 1 million to 9 million years ago. The region was once a sheltered, shallow marine environment ideal for preserving skeletons. The formation has produced articulated broad-toothed mako shark skeletons as well as fossils of whales, aquatic sloths and sea turtles.

The study strengthens the evolutionary link between the extinct mako and the modern white shark, said vertebrate paleontologist Kenshu Shimada, an associate professor at DePaul University in Chicago. Shimada said paleontologists now need fossil skeletons from megalodon and a shark from the extinct Otodontidae family such as Otodus, a large prehistoric mackerel shark that lived about 40 million to 60 million years ago.

"If we can demonstrate the strong link between Carcharocles and Otodus from such skeletal remains," Shimada said, "we may be able to settle the evolutionary and taxonomic debates."

Megalodon was first classified in the same genus as the modern white shark in the 1840s based on the similarity of tooth shape and serrations specialized for eating marine mammals. Mako sharks have no serrations because they feed primarily on fish.

Ehret says the shark fossil's coarse serrations are evidence of a transition between broad-toothed mako sharks and modern white sharks.

"Here we have a shark that's gaining serrations," he said. "It's becoming a white shark, but it's not quite there yet."