This is a printer version of an UnderwaterTimes.com article.
To view the article online, visit: http://www.underwatertimes.com/news.php?article_id=37809510216 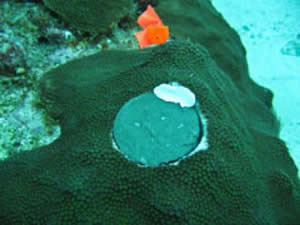 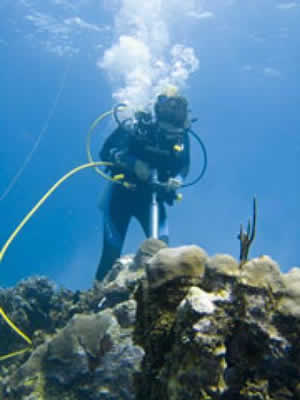 SAN DIEGO, California -- The new research study led by scientists at Scripps Institution of Oceanography at UC San Diego suggests that by improving overall ocean health, corals are better able to recover from bleaching events, which occur when rising sea temperatures force corals to expel their symbiotic algae, known as zooxanthellae. Coral bleaching is a phenomenon that is expected to increase in frequency as global climate change increases ocean temperatures worldwide.

The new findings, published in the July 22 issue of the journal PLoS ONE, show that following a major bleaching event Mountainous star coral (Montastraea faveolata) on various reefs in Honduras and Belize was able to recover and grow normally within two to three years when the surrounding waters and reef were relatively healthy. In comparison, those corals living with excessive local impacts, such as pollution, were not able to fully recover after eight years.

"You can imagine that when you are recovering from a sickness, it will take a lot longer if you don't eat well or get enough rest," said Jessica Carilli, Scripps graduate student and lead author on the study. "Similarly, a coral organism that must be constantly trying to clean itself from excess sediment particles will have a more difficult time recovering after a stressful condition like bleaching."

Carilli and colleagues analyzed 92 coral cores collected from four reef sites off the coast of Honduras and Belize. The cores were collected from reefs with different degrees of local stress from pollution, overfishing and sediment and nutrient run off from land. By using x-rays, the researchers were able to examine the coral's annual growth rate records since 1950, including the time before and after a major bleaching event in 1998.

"It is clear that Mesoamerican corals really fell off a cliff in 1998 -- nearly everybody suffered mass bleaching," said Dick Norris, Scripps professor of paleooceanography and co-author of the study. "There are no pristine reefs in the region, but the ones in the best shape clearly are more resilient than those that are long-suffering. It shows that a little improvement in growing conditions goes a long way in recovering coral health."

Corals are widely considered to be barometers for global warming and are important for biodiversity in the world's oceans. Coral reefs thrive in warm tropical oceans under just the right conditions that include moderate temperatures and low nutrient and sediment input from land-based sources. Protecting reef health from local sources of stress, such as runoff, can improve resilience to global warming stress.

Coral bleaching occurs when the tiny zooxanthellae, living with the tissues of coral polyps, which are responsible for their vibrant colors, are lost and the coral turns white in color.

The fast-recovering were corals collected from Turneffe Atoll, which is farther offshore than the main Belize Barrier Reef and Cayos Cochinos, a marine biological reserve off the northern coast of Honduras. Those that took longer to recover to pre-1998 conditions were from the Sapodilla Cayes in southern Belize and Utila in Honduras. The Sapodilla Cayes are a marine protected area, but experience significant runoff impacts; meanwhile Utila is quite heavily populated and local impacts probably result from development, sewage and other sources.