This is a printer version of an UnderwaterTimes.com article.
To view the article online, visit: http://www.underwatertimes.com/news.php?article_id=36192041057 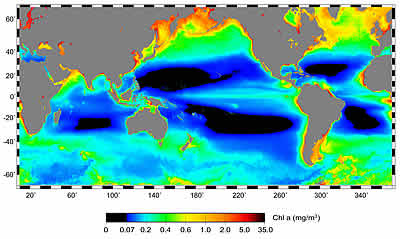 Black areas in the Atlantic and Pacific Oceans are the least productive. credit NOAA.

SILVER SPRING, Maryland -- The least biologically productive areas of the oceans are expanding much faster than predicted, according to a new study by researchers at NOAA and the University of Hawaii. This change in ocean biology, linked to the warming of sea surface waters, may negatively affect the populations of many fish species trying to survive in these desert-like environments.

Between 1998 and 2007, these expanses of saltwater with low surface plant life in the Pacific and Atlantic Oceans grew by 15 percent or 6.6 million square kilometers, according to the study which appears in Geophysical Research Letters. The expansion is occurring at the same time that sea surface temperatures are warming about one percent or .02 to .04 degrees Celsius a year. The warming increases stratification of the ocean waters, preventing deep ocean nutrients from rising to the surface and creating plantlife.

These barren areas are found in roughly 20 percent of the world’s oceans and are within subtropical gyres — the swirling expanses of water on either side of the equator.

“The fact that we are seeing an expansion of the ocean’s least productive areas as the subtropical gyres warm is consistent with our understanding of the impact of global warming. But with a nine-year time series, it is difficult to rule out decadal variation,” said Jeffrey J. Polovina, an oceanographer with NOAA’s National Marine Fisheries Service in Honolulu, who authored the study along with NOAA’s Evan A. Howell and Melanie Abecassis of the University of Hawaii.

The evidence of this expansion comes from data collected by a sensor aboard NASA’s orbiting SeaStar spacecraft. The Sea-viewing Wide Field-of-view Sensor, called SeaWiFS, is a unique tool that maps ocean biological productivity around the globe. This visual sensor reads reflective color to measure the density of chlorophyll in phytoplankton, the microscopic plants that are the base of the marine food web.

The research showed that the areas of low productivity in the Pacific Ocean are expanding from the center toward Hawaii. In the Atlantic Ocean, the least productive areas of the subtropical gyre are expanding at an even more rapid rate eastward across the Caribbean toward Africa. The low-productivity zones, likened to deserts, now cover an estimated 51 million square kilometers in the two oceans. The least productive area of the Indian Ocean shows the same trend, but there has been too much variability for it to be statistically significant.