This is a printer version of an UnderwaterTimes.com article.
To view the article online, visit: http://www.underwatertimes.com/news.php?article_id=35297416100 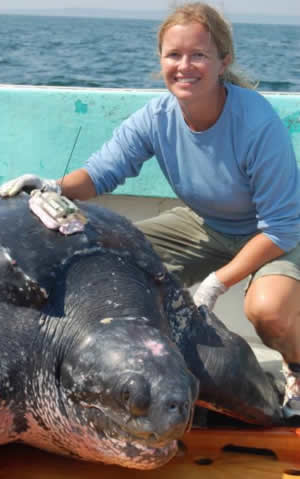 DURHAM, New Hampshire -- University of New Hampshire researchers have tagged one male and two female leatherback turtles off Cape Cod. They are the first free-swimming leatherbacks ever tagged in New England.

"We investigators spent 20 years attempting to learn about these animals on the high seas and temperate ocean waters, with only slow progress," says UNH research associate professor Molly Lutcavage, director of UNH's Large Pelagics Research Center. "This work will be useful for marine resource managers and others who want to understand how leatherbacks spend their days in the New England region and beyond." Lutcavage notes that this year's success is due to a convergence of people, know-how, and funding that allows researchers access to resources like spotter planes and commercial fishermen.

And, says Kara Dodge, the UNH Ph.D. student leading the tagging effort, the turtles are cooperating. "It's leatherback craziness this year," she says, noting that warmer water temperatures have brought an abundance of jellyfish, the primary food source for leatherbacks.

The $5,000 GPS-linked satellite tags Dodge and her colleagues, including Andy Myers, a postdoctoral researcher in the Large Pelagics Research Center (LPRC), are attaching to the leatherbacks aim to fill the knowledge gap on these elusive swimmers. The tags transmit depth, water temperature and location information daily via satellite, allowing researchers to gain much-needed insight into the movement patterns of the sea turtles. Dodge is also analyzing the data as it relates to oceanographic conditions and jellyfish distribution. The LPRC tagging team has been joined by investigators from the New England Aquarium's rescue rehab group and the Provincetown Center for Coastal Studies, who are profiling leatherback health and clinical information.

Dodge has tracked the male, who was tagged July 17 about eight miles offshore in Nantucket Sound, to south of an area called the Canyons, off the continental shelf. He has traveled about 1100 kilometers in less than two weeks. "He just took off," she says. "I think it's a speed record." The females, tagged July 26 and 29 in Vineyard Sound just eight miles southwest of Woods Hole, are swimming at a more leisurely pace; the first female is about 250 kilometers from where she was tagged and the second female swam about 65 kilometers between Tuesday and Wednesday.

Leatherback turtles, which can weigh up to 2000 pounds and are warm-bodied, like bluefin tuna, are the largest living reptiles in the world. The most migratory sea turtle species, they travel great distances through a wide range of water temperatures and to great depths. In the western Atlantic, leatherbacks travel from their nesting grounds in the Caribbean, northern South America, and southeast Florida to the productive foraging ground of Atlantic Canada. Leatherbacks typically come to the waters off Cape Cod from July through October although, says Dodge, "we've never known whether they're coming to forage or just passing through."

Previous tagging efforts by Dodge, Myers and Lutcavage have focused on leatherbacks that have been entangled in buoy lines of fishing gear. This year, thanks to additional funding from the National Fish and Wildlife Foundation, the researchers have been able to take commercial lobster boats out to areas where leatherbacks have been spotted. This off-shore access allowed Dodge to put a tag on a male; because they never return to shore after they hatch, little is known about male leatherbacks.

Off shore and away from their nesting areas, leatherback turtles have no natural predators except sharks and killer whales; entanglement in fishing gear, ingestion of marine debris and injuries from boat propellers are the major threats to their survival. "Understanding where they travel and how they use the water column will help us mitigate these human interactions," says Dodge. Emerging research indicates that climate change likely has a large impact on the leatherback population, as well.

Lutcavage, who's been working to better understand New England leatherback turtles since 1993, is thrilled to see the years of planning come to fruition. "It's been a long wait," she says.

The tagging effort will continue off Cape Cod through September; Dodge hopes to tag nine more leatherbacks. In addition to the National Fish and Wildlife Foundation, this work is supported by the National Marine Fisheries Service Northeast Regional Office and the Cape Cod Commercial Hook Fishermen's Association.