This is a printer version of an UnderwaterTimes.com article.
To view the article online, visit: http://www.underwatertimes.com/news.php?article_id=34769511002 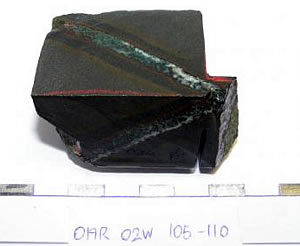 SOUTHAMPTON, UK -- The chemical composition of our oceans is not constant but has varied significantly over geological time. In a study published this week in Science, researchers describe a novel method for reconstructing past ocean chemistry using calcium carbonate veins that precipitate from seawater-derived fluids in rocks beneath the seafloor. The research was led by scientists from the University of Southampton's School of Ocean and Earth Science (SOES) hosted at the National Oceanography Centre, Southampton (NOCS).

"Records of ancient seawater chemistry allow us to unravel past changes in climate, plate tectonics and evolution of life in the oceans. These processes affect ocean chemistry and have shaped our planet over millions of years," said Dr Rosalind Coggon, formerly of NOCS now at Imperial College London.

"Reconstructing past ocean chemistry remains a major challenge for Earth scientists, but small calcium carbonate veins formed from warm seawater when it reacts with basalts from the oceanic crust provide a unique opportunity to develop such records," added co-author Professor Damon Teagle from SOES.

The researchers reconstructed records of the ratios of strontium to calcium (Sr/Ca) and magnesium to calcium (Mg/Ca) over the last 170 million years. To do this, they analysed calcium carbonate veins from basaltic rocks recovered by several decades of scientific deep-ocean drilling by the Integrated Ocean Drilling Program (IODP) and its predecessors.

"The carbonate veins indicate that both the Sr/Ca and Mg/Ca ratios of seawater were significantly lower than at present prior to about 25 million years ago. We attribute the increases in seawater Sr/Ca and Mg/Ca since then to the long-term effects of decreased seafloor volcanism and the consequent reduction in chemical exchange between seawater and the ocean crust," said Professor Teagle.