This is a printer version of an UnderwaterTimes.com article.
To view the article online, visit: http://www.underwatertimes.com/news.php?article_id=34296151078

Jean-Michel Cousteau: Despite Gulf Oil Spill, 'I Am More Optimistic Than I'Ve Ever Been'
Underwatertimes.com News Service
October 26, 2010 16:17 EST 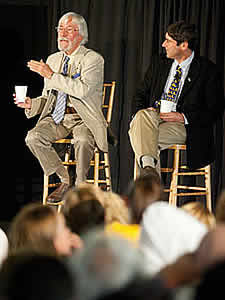 Cousteau and alum Richard Harris take questions from the audience after their presentations. credit UCSC

SANTA CRUZ, California -- The images were shocking: oiled birds struggling to move, dead fish floating in the shallows, and a fire burning through an oil slick on the Gulf of Mexico.

But Cousteau, son of famed ocean explorer Jacques-Yves Cousteau, who died in 1997, managed to make his "Report from the Gulf" uplifting instead of depressing.

"I am more optimistic than I've ever been," said Cousteau, honored last week with UCSC's Foundation Medal. "I am convinced we can change, and that the oil spill was the huge kick in the butt that we needed to change."

Cousteau, who has visited the gulf several times, and plans to return to finish an hour-long documentary about the spill's aftermath, tailored his message to the 120 middle and high school students who showed up to the event at downtown Santa Cruz's Rittenhouse Building.

The French-born Cousteau reminded these young people that his big, life-transforming moment happened when he was only a boy, trying out the scuba gear that his father helped to invent, and setting out to see the world in Captain Cousteau's marine vessels.

It was more of an education than any teacher could have given him.

Cousteau channeled the mischievous school kid he used to be when he talked about playing hooky with his brother to go sailing at sea--with his father's full consent and approval.

"My dad felt that being in the environment--seeing, touching, smelling--was much more important than being in jail at school," Cousteau said, drawing scattered chuckles from the youngsters in the crowd.

Emboldened by his youth-friendly presentation, young students dominated the Q and A session with incisive questions and observations.

"If we already have all this alternative energy technology, why aren't we using it?" said Kelly McCandless, 11, to loud applause. McCandless is part of the Santa Cruz City Schools Alternative Family Education ( AFE ) program, a home study school provided for kindergarten through 12th grade students.

Cousteau urged McCandless to "go out and kick some [rear ends]" to make the adult world embrace more renewable energy sources, including an algae-based fuel for ships and planes.

Other students wanted to know more about the circumstances that led up to the oil spill.

"Why did we resort to using oil in the first place?" said Joshua Lovell, 10, who traveled from Stockton to watch the presentation, and who later conversed at some length with Cousteau.

On April 20, a methane-gas explosion, which killed 11 workers, set off the massive leak, which amounted to nearly 5 million barrels of crude oil, far exceeding the 1989 Exxon Valdez spill in Alaska's Prince William Sound.

Harris was among the doubters when BP argued, in the early stages, that about 5,000 gallons' worth of crude was spilling into the gulf daily. He assembled a team of experts--an astrophysicist, a nanotechnology expert who studies the flow of fluid through pipes, and a marine biologist studying underwater thermal vents. "Lo and behold--all three said that 50,000 to 75,000 barrels a day were coming out."

Harris mentioned that the spill, as vast as it was, only amounted to five hours' worth of power for America's millions of trucks and cars.

Many audience members wanted to know exactly how bad the spill really was. How many creatures perished? What could happen next?

Cousteau and Harris warned that its full impact has not yet been revealed. Cousteau talked about dolphins having to give birth and breast-feed in the oily environment, the impact on creatures vital to the food chain, and the tens of thousands of people who make their living in the gulf.

Cousteau heads the Ocean Futures Society, a nonprofit marine conservation and education organization, which he founded in 1999 to build on the work of his famous father, whose 100th birthday is this year.

The organization is based in Santa Barbara--"where I picked up this accent," Cousteau said, with a mischievous expression.