This is a printer version of an UnderwaterTimes.com article.
To view the article online, visit: http://www.underwatertimes.com/news.php?article_id=34069815721 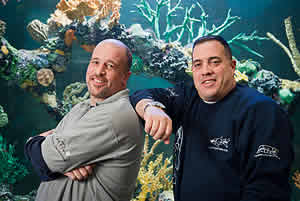 NEW YORK, New Yrok -- These aren't your father's fish tanks or bright goldfish from your youth... And these are definitely not your typical fish tank builders. Welcome to the wet and wonderful world of TANKED, where owners Wayde King and Brett Raymer build tanks and aquariums for top celebrities, luxury hotels, Fortune 500 businesses, private homes and millionaire homeowners. These massive and creatively designed tanks are filled with some of the most extraordinary aquatic wildlife from around the globe! And as Brett always says, "If you can dream it, we can build it!"

Premiering Friday, August 19 at 9 PM (ET/PT), TANKED is a six-part reality series set at the Las Vegas-based Acrylic Tank Manufacturing (ATM), founded by Wayde and Brett. It's not only the most successful, but the most monstrous, tank manufacturer in America. The larger-than-life duo are business partners, brothers-in-law, best friends, pranksters and constant rivals who are determined to create, build, and unveil some of the most over-the-top aquariums the world has ever seen. But it's not just about the boys â it's a family affair, because they're joined by Heather, Wayde's wife and Brett's sister; Brett and Heather's father, "The General;" and a motley crew of designers, engineers, installers, cleaners and builders â making them one big dysfunctional, brash and super-sized family.

Originally New Yorkers, Wayde and Brett are now making a splash in Sin City, dunking viewers into the outlandish yet intricate world of the aquarium-building business. TANKED kicks off with a wide array of creative projects with clients ranging from casinos and high-profile restaurants to homeowners and churches. The duo takes on working with opinionated and outrageous family and staff along with creating enormous and jaw-dropping aquariums for every space imaginableâ¦ and while pranking one another along the way. Not only do they build tanks in Vegas, the team traverses the country for their clients, with builds in New York City and Dallas, and in Florida and California. Some of their amazing tank builds include a car cut in half, a jukebox, a telephone booth, a skate ramp, inside a church and a beer keg inside a mancave.

"I can't tell which is bigger sometimes â the tank builds or their personalities," noted Marjorie Kaplan, president and general manager of Animal Planet. "TANKED is a build show, it's a family business show, it's a pet show and it's a flashy show with big reveals. And it's just a whole lot of fun."

The family-owned company, ATM, takes on more than 200 projects every year and is housed within a 13,000 square foot state-of-the-art facility located in the heart of Las Vegas. ATM tanks range from 50 to 50,000 gallons in size and are filled with some of the world's most exotic and dangerous fish. They build tanks for celebrities and ordinary Joes, and their aquariums and their business are filled with the most unusual, colorful and quirky fish in the world.