This is a printer version of an UnderwaterTimes.com article.
To view the article online, visit: http://www.underwatertimes.com/news.php?article_id=32517486910 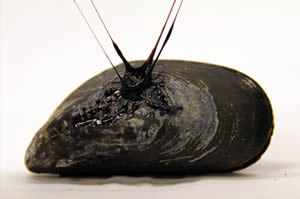 Mussels can generate their own self-healing sticky material, which allows them to attach to rocks and to repair microtears. credit Tara Fadenrecht

CHICAGO, Illinois -- Scientists can now manufacture a synthetic version of the self-healing sticky substance that mussels use to anchor themselves to rocks in pounding ocean surf and surging tidal basins. A patent is pending on how to make the substance. Potential applications include use as an adhesive or coating for underwater machinery or in biomedical settings as a surgical adhesive or bonding agent for implants.

Inspiring the invention were the hair-thin holdfast fibers that mussels secrete to stick against rocks in lakes, rivers and oceans. "Everything amazingly just self-assembles underwater in a matter of minutes, which is a process that's still not understood that well," said Niels Holten-Andersen, a postdoctoral scholar with chemistry professor Ka Yee Lee at the University of Chicago.

Holten-Andersen, Lee and an international team of colleagues published the details of their invention in the Jan. 24-28 Proceedings of the National Academy of Sciences Early Edition. Holten-Andersen views the evolution of life on Earth as "this beautiful, amazingly huge experiment" in which natural selection has enabled organisms to evolve an optimal use of materials over many millions of years.

"The mussels that live right on the coast where the waves really come crashing in have had to adapt to that environment and build their materials accordingly," he said.

Many existing synthetic coatings involve a compromise between strength and brittleness. Those coatings rely on permanent covalent bonds, a common type of chemical bond that is held together by two atoms that share two or more electrons. The bonds of the mussel-inspired material, however, are linked via metals and exhibit both strength and reversibility.

"These metal bonds are stable, yet if they break, they automatically self-heal without adding any extra energy to the system," Holten-Andersen said.

A key ingredient of the material is a polymer, which consists of long chains of molecules, synthesized by co-author Phillip Messersmith of Northwestern University. When mixed with metal salts at low pH, the polymer appears as a green solution. But the solution immediately transforms into a gel when mixed with sodium hydroxide to change the pH from high acidity to high alkalinity.

"Instead of it being this green solution, it turned into this red, self-healing sticky gel that you can play with, kind of like Silly Putty," he said. Holten-Andersen and his colleagues found that the gel could repair tears within minutes.

"You can change the property of the system by dialing in a pH," said Ka Yee Lee, a professor in chemistry at UChicago and co-author of the PNAS paper. The type of metal ion (an electrically charged atom of, for example. iron, titanium or aluminum) added to the mix provides yet another knob for tuning the material's properties, even at the same pH.

"You can tune the stiffness, the strength of the material, by now having two knobs. The question is, what other knobs are out there?" Lee said.

This week's PNAS study reports the most recent in a series of advances related to sticky mussel fibers that various research collaborations have posted in recent years. A 2006 PNAS paper by Haeshin Lee, now of the Korea Advanced Institute of Technology, Northwestern's Phillip Messersmith and UChicago's Norbert Scherer demonstrated an elusive but previously suspected fact. Using atomic-force microscopy, they established that an unusual amino acid called "dopa" was indeed the key ingredient in the adhesive protein mussels use to adhere to rocky surfaces.

Being able to manufacture green materials is another advantage of drawing inspiration from nature. "A lot of our traditional materials are hard to get rid of once we're done with them, whereas nature's materials are obviously made in a way that's environmentally friendly," Holten-Andersen said.

Mussels can generate their own self-healing sticky material, which allows them to attach to rocks and to repair microtears caused by breaking waves and sand abrasion, but the elastic gel attached to this one was created in the laboratory. A patent is pending on how to make the gel, which is described online in this week's Proceedings of the National Academy of Sciences Early Edition.