This is a printer version of an UnderwaterTimes.com article.
To view the article online, visit: http://www.underwatertimes.com/news.php?article_id=32110485796 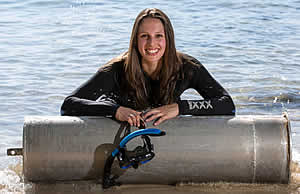 SYDNEY, Australia -- An international team lead by Macquarie researchers has found that humpback whales are not only unfazed by complex alarm sounds designed to alert them to hazards like fishing gear, they have no response to these warning sounds at all.

The research team tested whether 'complex' whale alarm sounds, instead of previously tested simpler ones, could influence the whales to avoid potential hazards.

"We used louder sounds combined with complex tones to see if this would work to deter the whales," explained lead author and Macquarie PhD student, Vanessa Pirotta.

To test their new sounds, the researchers moored a whale alarm to 'single unit fishing gear', such as a lobster pot, in the middle of the so-called 'humpback highway' off the Sydney coast during their 2013 northern migration, and used a theodolite â a surveyors tool â to track the animals' movements in response to the new alert signals. However, the whales appeared not to respond, continuing to surface and travel in the same direction as normal.

"The lack of measurable response suggests that these new types of tones are not likely to be effective in alarms intended to reduce entanglements for the northward migrating humpback whales," Ms Pirotta said.

"While we haven't yet cracked the whale code in terms of warning sounds, we are still learning a lot about the types of alerts that these animals will and won't react to," she added.

The study builds on previous work by the same research group, which tested whether a simple and commercially available whale alarm, designed to warn whales about the presence of dangerous fishing equipment, elicited a response in whale behaviour.

"In the previous study we wanted to see if whales would avoid fishing gear when a simple alarm was turned on versus when the alarm was off. Much like your mobile phone or GPS, the idea of a whale alarm is to alert whales of something, in this case the presence of fishing gear, so that they move away from danger," explained Ms Pirotta.

"Unfortunately the research suggested that simple alarm sounds were also not effective in preventing whale entanglement at least for single unit fishing gear such as lobster or crab pots as we tested," explained Ms Pirotta.

While Dory made it look very easy to speak whale in Finding Nemo, it appears that our scientists still have their work cut out for them when it comes to producing warning alerts in humpback lingo. However, the cause is an important one, with humpback whales frequently getting entangled during their northern migration in barriers such as shark nets, with the most recent case involving a humpback calf only months ago.