This is a printer version of an UnderwaterTimes.com article.
To view the article online, visit: http://www.underwatertimes.com/news.php?article_id=31107942065 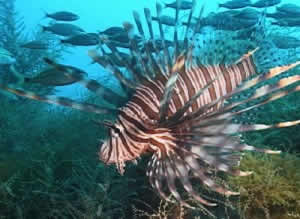 Their names roll of the tongue like a rogues' gallery: Floyd, Frances, Irene, Wilma and Andrew. But these aren't the names of notorious criminals; rather, they are just a few of the hurricanes since 1992 that have helped spread invasive marine species throughout the Florida Straits.

Researchers at Nova Southeastern University's (NSU) Oceanographic Center have discovered that storms don't only have a dramatic impact on land; they have an equally dramatic effect on ocean currents, which helps the spread of marine invasive species throughout a region. More specifically, NSU researchers looked at the distribution of lionfish in the Florida Straits.

"This is the first-ever study that shows hurricane-altered ocean currents are able not only to help, but actually accelerate the invasion of non-native marine species of any kind," said Matthew Johnston, Ph.D., one of the research scientists at NSU's Oceanographic Center who conducted the study. "Lionfish are pretty sedentary, so this is like creating express lanes on a superhighway â otherwise, that's a pretty long swim for lionfish babies."

The research, conducted by Johnston and NSU Oceanographic Center Professor Sam Purkis, Ph.D., focused on the explosion of lionfish populations in area waters. Their findings are being published in the journal Global Change Biology. Another NSU Oceanographic Center Professor, Richard Spieler, Ph.D., in the course of his research, was one of the first to see lionfish in Bahamian waters soon after their arrival.

Not to be too technical, Johnston said that the research focused on how large storms (i.e. hurricanes) affect the flow of water in the Florida Straits. Normally, the currents represent a potential barrier to the transport of lionfish eggs and larvae across the Florida Straits. The researchers found that as a hurricane passes, the flow of water shifts from a strong, northern flow to a strong, eastern flow.

It's these changes in flow direction and speed that likely carry lionfish larvae and eggs from Florida to the Bahamas and can explain how lionfish were able to cross the Gulf Stream so soon after their introduction to South Florida waters.

Johnston said that once they were established in the Bahamas, hurricanes allowed lionfish to spread quickly against the normal, northwestern direction of water flow in the area. In addition, the storms helped increase the spread of lionfish by approximately 45% and their population size by 15%.

"The study has broader implications in that global climate change may cause an increase in storm frequency and/or intensity, perhaps further accelerating the spread of marine invasives," Johnston said. "Given that South Florida is a hotspot for marine invasive species, the transport of marine larvae from Florida to the Bahamas on hurricane-altered water flow may become commonplace for invasive and native species alike."

Johnston indicated this research has two implications. First, we need to make a concerted effort to prevent marine introductions to begin with and second, we must implement vigorous, early-detection programs to remove these invasive species before they become a problem. Now the team wants to take this research concept and study similar situations in the South Pacific where typhoons are common.

You can find the complete paper on the effect hurricanes have on non-native species in the Florida Straits online at Global Change Biology.