This is a printer version of an UnderwaterTimes.com article.
To view the article online, visit: http://www.underwatertimes.com/news.php?article_id=30810572914 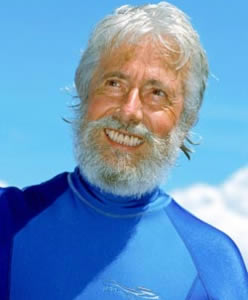 Jean-Michel Cousteau has launched a campaign against toxic flame retardants

SANTA BARBARA, California -- During a recent expedition, Jean-Michel Cousteau and his Ocean Futures Society team were faced with an alarming fact: many populations of killer whales are contaminated with toxic, synthetic flame retardant chemicals known as PBDEs.

The most toxic of these flame retardants have been required by the State of California in furniture and many children’s products to reduce flammability.

The flame retardant in use today, “DecaBDE,” is dangerous and widespread, used in many common products, including TVs, electronics, textiles, and furniture. Two of the flame retardant compounds were banned in 2003 in California and other states, and although they are no longer manufactured, their levels in the environment are still rising.

Mr. Cousteau announced, “The OFS team and I cannot wait to act. We are joining forces with decision-makers in government and industry to address the public’s demand for protection.”

Dr. Arlene Blum, executive director of the Green Science Policy Institute noted, “In animal studies, these chemicals cause scrambling of brain development, attention deficit/hyperactivity disorder, reproductive abnormalities, diabetes, obesity and cancer. These are the same conditions that are increasing in our children, who are highly exposed to fire retardant chemicals. Both human and killer whale babies are now born with toxic fire retardant chemicals in their bodies and receive an additional dose from their mothers’ milk.”

The science is clear that these chemicals represent enormous potential harm to the development of both animals and children. Ocean Futures Society takes the stance that this is an issue that must be addressed by policy makers, scientists, healthcare providers, and the public.

Mr. Cousteau stated, “Time is of the essence. We didn’t know before, but now we do and it’s not an issue of pointing fingers or accusing anybody. Now that we know the consequences, we need to immediately change. It's time to find ways to prevent such chemicals from entering the environment in the first place, to find alternatives, and to anticipate problems before they occur. We cannot wait to find a cure for dangerous products after they are in the environment and in us.”

The Ocean Futures Society campaign intends to educate, inform and create a dialogue for change from the level of the individual to the corporate boardroom and international legislatures until environmental protection from toxic contaminants like flame retardants is assured.