This is a printer version of an UnderwaterTimes.com article.
To view the article online, visit: http://www.underwatertimes.com/news.php?article_id=30527811049 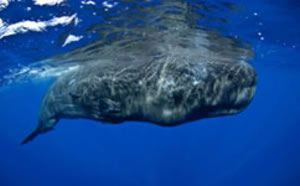 New research reveals that sperm whales communication may be cultural, not genetic

ST ANDREWS, Fife -- Differences in the patterned clicks that sperm whales use to communicate with each other seem to be down to culture and not genetics, say researchers.

The finding could influence conservation efforts; instead of focusing solely on where the animals live, protection should also consider which dialect they use.

All sperm whales in a pod use the same small selection of patterned clicks. Scientists think they use the sounds to show other whales that they're part of the same gang.

But in the Pacific, scientists have discovered that the whales belong to one of five clans, with each clan using a different dialect. Each dialect is made up of a different handful of similar Morse code-like patterned clicks called codas. The whales may use the clicks to communicate that they belong to a particular pod, and to maintain social bonds.

Luke Rendell from the University of St Andrews and his colleagues wondered if maybe the difference between clans was down to genetics.

'It's an obvious question to ask. What are the genetics of these populations? Are these dialects culturally transmitted or genetic?' says Rendell.

To find out, Rendell and colleagues from the US and Canada extracted DNA from the whales' sloughed skin to see if they could see any genetic differences between the clans. In total, they analysed DNA from 194 sperm whales belonging to 30 different social groups from three of the vocal clans across the Pacific Ocean.

If the whales' dialects were biologically determined, those that share the same dialect would have similar genes too. But this isn't what the researchers found.

Instead, they found that whales with different repertoires of codas are often genetically similar. This suggests that the genetic differences don't explain clan differences, and that dialects must be passed down through the generations. It turns out that the clans don't just have different dialects; they also have different hunting patterns, parenting habits, and reproductive rates.

'All the evidence for culture relies on methods of exclusion. It's very difficult to actually prove cultural transmission,' says Rendell. 'But our finding isn't consistent with anything other than cultural dialects.'

Sperm whale pods are made up of females â with a few young â and average around 12 individuals. Male sperm whales leave the pod when they're juveniles and join all-male pods for a few years, before beginning a solitary life roaming the oceans.

This latest study, published in Behaviour Genetics suggests that sperm whale groups are made up of individuals that use the same dialect, rather than those that come from a similar area of the Pacific.

The creatures hold a range of records: they're the deepest diving mammal, the largest toothed whale and have the biggest brain on Earth. But they don't have the sharpest eyesight or sense of smell. So they communicate using codas, which can be incredibly loud. The sounds are very different to the sounds made by other marine mammals like humpback whales, which sing haunting songs to each other, or dolphins which whistle.

The whales make the sounds in the 'big tub of oil at the front of their huge heads', explains Rendell. Along with air sacs in the whales' heads, the structure produces multiple pulses, just fractions of a second apart.

'We hope our finding will get people thinking about conservation, and the idea that behavior in marine mammals is culturally-determined,' Rendell says.

This story is republished courtesy of Planet Earth online.