This is a printer version of an UnderwaterTimes.com article.
To view the article online, visit: http://www.underwatertimes.com/news.php?article_id=30428591610 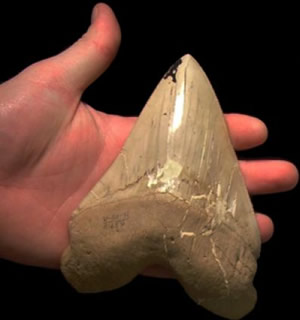 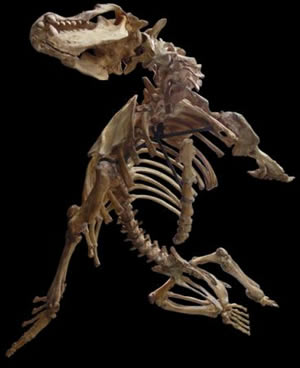 This is a reconstructed skeleton of the extinct seal Allodesmus from the Sharktooth Hill Bone Bed. Credit:Nick Pyenson

BERKELEY, California -- In the famed Sharktooth Hill Bone Bed near Bakersfield, Calif., shark teeth as big as a hand and weighing a pound each, intermixed with copious bones from extinct seals and whales, seem to tell of a 15-million-year-old killing ground.

Yet, new research by a team of paleontologists from the University of California, Berkeley, the University of British Columbia in Vancouver, Canada, and the University of Utah paints a less catastrophic picture. Instead of a sudden die-off, the researchers say that the bone bed is a 700,000-year record of normal life and death, kept free of sediment by unusual climatic conditions between 15 million and 16 million years ago.

The team's interpretation of the fossils and the geology to establish the origins of the bone bed, the richest and most extensive marine deposit of bones in the world, are presented in the June 2009 issue of the journal Geology.

The mix of shark bones and teeth, turtle shells three times the size of today's leatherbacks, and ancient whale, seal, dolphin and fish skeletons, comprise a unique six-to-20-inch-thick layer of fossil bones, 10 miles of it exposed, that covers nearly 50 square miles just outside and northeast of Bakersfield.

Since the bed's discovery in the 1850s, paleontologists have battled over an obvious question: How did the bones get there? Was this a killing ground for megalodon, a 40-foot version of today's great white shark? Was it a long-term breeding area for seals and other marine mammals, like Mexico's Scammon's lagoon is for the California gray whale? Did a widespread catastrophe, like a red tide or volcanic eruption, lead to a massive die-off?

The new and extensive study of the fossils and the geology of Sharktooth Hill tells a less dramatic story, but an important one, for understanding the origin of rich fossil accumulations, said Nicholas Pyenson, a former UC Berkeley graduate student who is now a post-doctoral fellow at the University of British Columbia.

"If you look at the geology of this fossil bed, it's not intuitive how it formed," Pyenson said. "We really put together all lines of evidence, with the fossil evidence being a big part of it, to obtain a snapshot of that period of time."

Pyenson and his colleagues, totaling five UC Berkeley Ph.D.s and UC Berkeley integrative biology professor Jere Lipps, hope that the study will draw renewed attention to the bone bed, which Lipps said needs protection even though a small portion of it was added to the National Natural Landmark registry in 1976.

"This deposit, if properly developed, would look just like Dinosaur National Monument," said Lipps, referring to a popular park in Colorado and Utah. "(Sharktooth Hill) is actually much more extensive, and the top of the bone bed has complete, articulated skeletons of seals and other marine mammals."

One 12-foot-long fossil seal skeleton that Lipps helped excavate during the 50 years he has visited the bone bed was mounted and displayed for decades at the Natural History Museum of Los Angeles County (NHM), which houses thousands of fossils excavated from the Sharktooth Hill deposits during expeditions in the 1960s and 1980s. Other collections are in the California Academy of Sciences, San Diego Natural History Museum, Buena Vista Museum of Natural History in Bakersfield, and UC Berkeley's Museum of Paleontology (UCMP), where students over the years have made studies of the bone bed's extinct sea turtles, sharks, marine mammals and seabirds. Lipps is a faculty curator in the UCMP.

The paper's other coauthors - all of whom obtained their Ph.D.s from UC Berkeley are Randall B. Irmis, now an assistant professor of geology and geophysics at the University of Utah, and Lawrence G. Barnes, Edward D. Mitchell Jr. and Samuel A. McLeod of NHM's Department of Vertebrate Paleontology.

When the bone bed formed between 15,900,000 and 15,200,000 years ago, the climate was warming, sea level was at a peak, California's Central Valley was an inland sea dubbed the Temblor Sea and the emerging Sierra Nevada was shoreline. By closely studying the geology of the Sharktooth Hill area, the paleontologists determined that it was part of an underwater shelf in a large embayment, directly opposite a wide opening to the sea.

Pyenson and Irmis examined some 3,000 fossilized bone and teeth specimens in the collections of many museums, including the NHM and UCMP, and they and Lipps also cut out a meter-square section of the bone bed, complete with the rock layers above and below, and transported it to UC Berkeley for study.

Below the bone bed, they found several feet of mudstone interlaced with shrimp burrows, typical of ocean floor sediment several hundred to several thousand feet below the surface. The bone bed itself averaged 200 bones per square meter, most of them larger bones, with almost no sediment. Most were disarticulated, as if the animal carcasses had decayed and their bones had been scattered by currents.

"The bones look a bit rotten," Lipps said, "as if they lay on the seafloor for a long time and were abraded by water with sand in it." Many bones had manganese nodules and growths, which form on bones that sit for long periods in sea water before being covered by sediment.

The team's conclusion is that the climatic conditions were such that currents carried sediment around the bone beds for 100,000 to 700,000 years, during which time bones remained exposed on the ocean floor and accumulated in a big and shifting pile.

Given the rarity of bones marked by shark bites, plus the occurrence of terrestrial animals such as tapirs and horses that must have washed out to sea, predation by sharks like Carcharocles megalodon seems unlikely to have been the major source of the bone bed, the authors wrote. Because of few young or juvenile specimens, the team also discounted the hypothesis that this was a breeding ground for early seals such as Allodesmus. The absence of volcanic ash makes a volcanic catastrophe unlikely, while the presence of land mammal fossils makes red tide an unlikely cause.

"These animals were dying over the whole area, but no sediment deposition was going on, possibly related to rising sea levels that snuffed out silt and sand deposition or restricted it to the very near-shore environment," Pyenson said. "Once sea level started going down, then more sediment began to erode from near shore."