This is a printer version of an UnderwaterTimes.com article.
To view the article online, visit: http://www.underwatertimes.com/news.php?article_id=30249107158 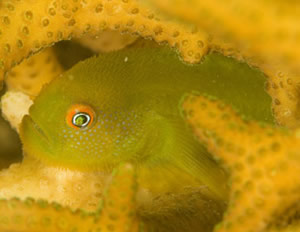 TOWNSVILLE, Australia -- People diet to look more attractive. Fish diet to avoid being beaten up, thrown out of their social group - and getting eaten as a result.

That is the fascinating conclusion of the latest research into fish behavior by researchers from the ARC Centre of Excellence for Coral Reef Studies and James Cook University, described in the journal Current Biology.

The same team who recently revealed fish use the threat of punishment to keep competitors in the mating game in line, have taken the work a step further to discover that subordinate fish deliberately go on a diet to avoid posing a challenge to their larger rivals.

“In studying gobies we noticed that only the largest two individuals, a male and female, had mating rights within the group,” explains Dr Marian Wong. “All other group members are non-breeding females, each being consistently 5-10 per cent smaller than its next largest rival. We wanted to find out how they maintain this precise size separation.”

The reason for the size difference was easy to see. Once a subordinate fish grows to within 5-10 per cent of the size of its larger rival, it provokes a fight which usually ends in the smaller goby being expelled from the group – and the safety of the coral it occupies. More often than not, the evicted fish is then gobbled up by a predator.

It appeared that the smaller fish were keeping themselves small in order to avoid provoking the boss fish. Whether they did so because of stress caused by the bullying of larger fish - or voluntarily, by restraining how much they ate was not clear.

The team of Dr Wong, Dr Philip Munday, Dr Peter Buston and Professor Geoff Jones decided to try to fatten up some of the subordinate gobies to see what happened. To their surprise, the gobies simply refused the extra tidbits they were offered, apparently preferring to remain small and avoid fights, over having a feast.

The discovery challenges the traditional scientific view of how dominant individuals retain their position in a hierarchy. Previously it was thought that large individuals simply used their weight and size to terrorise their subordinates and grab more of the food for themselves, so keeping their rivals small.

The CoECRS team has established that subordinate members of the group can voluntarily go on a diet to avoid provoking conflict.

While the habits of gobies – among the less glamorous of coral reef fish – may seem a little arcane, Dr Wong explains that understanding the relationships between dominant and subordinate animals is important to understanding how hierarchical societies remain stable. Gobies provide the perfect experimental species as they are easy to observe and can be trained to feed from artificial food sources.

The research has highlighted the fact that voluntary dieting is a habit far from exclusive to humans – and appears to reach back at least as far as our fishy ancestors, although different species may diet for quite different reasons.

“As yet, we lack a complete understanding of how widespread the self-imposed reduction of food intake is in nature, and how it benefits individuals,” the researchers comment.

“Data on human dieting suggests that, while humans generally diet to improve health or increase attractiveness, rarely does it improve long-term health and males regularly prefer females that are fatter than the females’ own ideal.”