This is a printer version of an UnderwaterTimes.com article.
To view the article online, visit: http://www.underwatertimes.com/news.php?article_id=30102549167 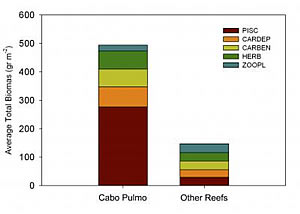 The average fish biomass from a 2009 expedition reveals that Cabo Pulmo has recovered its marine community.

SAN DIEGO, California -- Once described by Jacques Cousteau as the "world's aquarium," the marine ecosystems of the Gulf of California are under threat. Destructive new fishing methods are depleting the sea's habitats, creating areas that are ghosts of their former existences (see Scripps explorations story "Threatened Gulf".

But, as Octavio Aburto-Oropeza of Scripps Institution of Oceanography at UC San Diego will describe during a presentation at the 2010 American Association for the Advancement of Science (AAAS) annual meeting in San Diego, habitat conservation can revitalize once-depleted marine ecosystems (session: 8:30-10 a.m., Sunday, Feb. 21, Room 6D, San Diego Convention Center).

One recently emerging threat is a highly destructive fishing method called "hookah" diving in which fishermen use crude oxygen piping to walk along the seafloor for long periods. The technique is typically conducted at night when fish are resting, allowing the hookah fishermen to spear or grab large numbers of vulnerable fish and invertebrates.

Aburto-Oropeza's findings on reversing the effects of such threats are part of a series of research studies headed by the newly launched Gulf of California Program based at Scripps Oceanography.

"In these studies, whether reefs or mangroves, we are trying to show that the destruction on the coast and overexploitation in other areas are diminishing the biomass (the amount of organisms in an ecosystem) in several areas," said Aburto-Oropeza. "With lower biomass, the large predators, the keys to a robust marine ecosystem, are missing and that causes disruption down the marine food web."

But there is hope to counteract such damage, says Aburto-Oropeza.

One successful example is Cabo Pulmo, a little-known protected area near the southern tip of the Baja peninsula that is thriving and a living example of the benefits of protected marine areas. Restricted of fishing since 1995, Cabo Pulmo features a robust mix of sea life and flourishing fish populations. Other successes include Coronado Island inside the Loreto marine park and Los Islotes inside Espiritu Santo marine park.

"Different sites recover in different ways, but they all have increased in biomass, especially top predators," said Aburto-Oropeza.

"The common thing is that they have reduced or eliminated fishing activity."

Beyond simply shielding certain locations, Aburto-Oropeza's presentation will cover new research that reveals the strategic importance of protecting areas that are key for fish species populations. In particular, these include important sites such as fish "spawning aggregation" areas, where fish converge in large numbers to reproduce at select times of the year, and sensitive nursery habitats that are vital to ensuring healthy ecosystems.

"For some species these spawning aggregation events occur two to four times per year, and can represent 100 percent of the replenishment of their populations," said Aburto-Oropeza.

Aburto-Oropeza and others recently calculated the economic value of mangroves at roughly $37,500 per hectare per year. An ongoing study has shown that a fish species called gulf corvina provided 3,500 tons of landings in 2009 in one community, a volume worth $3 million.