This is a printer version of an UnderwaterTimes.com article.
To view the article online, visit: http://www.underwatertimes.com/news.php?article_id=29754081061 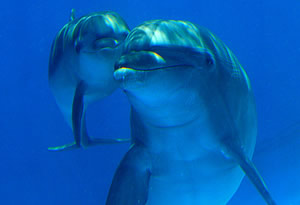 The birth represents the first calf in Mexico to be born after using sperm sexing and artificial insemination technologies. The calf is the result of a recent collaboration between Dolphin Adventures and SeaWorld and Busch Gardens Reproductive Research Center in San Diego, CA.

SeaWorld and Busch Gardens Reproductive Research Center (SWBGRRC) is the only organization in the world to apply preferential sex-selection reproductive research to exotic animals.

“There are many species, such as dolphins and elephants, which in the wild exist in single-sex dominated groups. Our continued advancements in sex-selection technology will allow zoos to provide optimal social environments and maintain species’ genetic diversity.”

Sperm sexing by flow cytometry utilizes a technology owned and developed by the biotechnology company XY Inc. SeaWorld and Busch Gardens Reproductive Research Center modified the technology to separate dolphin sperm that carry a female-producing X chromosome from sperm that carry a male-producing Y chromosome. Following separation into female and male populations, sperm are frozen and stored for future insemination. The sexing procedure does not involve genetic modification; it simply separates the female and male producing sperm. High accuracy of the procedure results in sperm samples containing greater than 90 percent of the desired sex. All sex-selected dolphin calves born to date have been female, giving a 100% success rate for the Centers’ efforts.

At 13:39 December 4, 2009, Aclina gave birth to a healthy female calf, the world’s tenth marine mammal to have its sex determined prior to conception, under the watchful eyes of Dolphin Adventure dolphin trainers, animal care specialists and veterinarians. The calf weighed approximately 18 kilograms and measured between 4 and 4 1/2 feet. The first sex-selected zoological species, an Atlantic bottlenose dolphin, was born at SeaWorld San Diego in October 2005.

“We are extremely excited about demonstrating the potential to apply valuable knowledge gained from our research in the Reproductive Center toward bottlenose dolphin reproductive and social health,” said Montano.

Smolensky added that “the achievement demonstrates the potential of our collaborative research project between Dolphin Adventure and SeaWorld Parks and Entertainment which is dedicated toward applying this novel technology toward zoological stewardship.”

While this reproductive technology will significantly assist zoological institutions around the globe to optimally manage their species’ genetic diversity, the knowledge gained from this scientific research may ultimately have application in marine and terrestrial animals in the wild, including endangered species. “To produce a dolphin whose sex was predetermined for a tenth time is a major milestone for the zoological community,” said Wayne Phillips, General Manager, Dolphin Adventure, Nuevo Vallarta, Mexico.