This is a printer version of an UnderwaterTimes.com article.
To view the article online, visit: http://www.underwatertimes.com/news.php?article_id=29463107105

Should Females Trust Showy Males? 'Honesty In Males Mostly Depends On How Many Opportunities There Are To Breed'
Underwatertimes.com News Service
August 21, 2009 17:22 EST 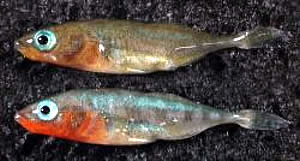 A study of three-spined sticklebacks suggests females should be wary of initial flashy displays from males.

GLASGOW, Scotland -- How honest are males when using sexual displays to signal their eligibility to females?

Research by evolutionary biologists at the universities of Glasgow and Exeter suggests females should be wary of initial flashy displays which may not have staying power.

A male animal’s sexual signals, such as his song or bright colouration are an attempt to attract females. Since these displays demand considerable effort to produce, a louder or brighter display is meant to indicate that the male is in good condition. But can females trust these signals to be a reliable indication of the male’s quality?

A team of researchers led by Dr Jan LindstrÃ¶m at the University of Glasgow have found that the honesty of the signal can vary dramatically over time, depending on both the condition of the male and the likelihood of him obtaining future matings. The research suggests it may pay females to wait until ‘dishonest’ males have exhausted themselves in producing a flashy signal that they cannot sustain.

Evolutionary biologist, Dr LindstrÃ¶m said: “Honesty in males mostly depends on how many opportunities there are to breed. If males can breed now but the future promises little in terms of further matings, all males should immediately reveal their ‘true colours’ – so that the signals they produce are a reliable indication of their quality. But if males can potentially breed several times over the course of a breeding season, it pays those in best condition to keep some of their strength in reserve.

“In contrast, those males in poorer condition cannot afford to delay seeking a mate, so must signal as hard as they can – with the result that at the start of the breeding season a female cannot reliably judge a male’s quality from his signal. However, as time goes on, the poorer condition males must drop out of the competition, leaving only the better ones and making it easier for a female to pick a high quality mate.”

Predictions from a new mathematical model of these processes were tested using three-spined sticklebacks, a species of fish in which breeding males develop a red throat in order to attract females (see photo below). Sticklebacks can breed several times over the course of the summer, but pay a heavy price since few survive for another year.

Dr LindstrÃ¶m said: “We found that the redness of the males changed over the summer, with all starting out red but only those in good condition being able to sustain their colour. As predicted by our model, females seemed to ignore the redness of a male when choosing a mate in early summer, and only developed a preference for redder males later, once it became a more honest signal of a male’s quality.”

So it seems that the attempts by poor quality males to hide their weaknesses behind a flashy display were only partially successful, which helps explain why the system persists, since females are only persuaded by an attractive display at times when it is an honest signal of quality.

The study was a collaboration between the Universities of Glasgow and Exeter, and was funded by the UK’s Natural Environment Research Council. It will be published in the October print issue (available online from 21 August) of the prestigious scientific journal American Naturalist as: Lindstrom, J., Pike, T.W., Blount, J.D. & Metcalfe, N.B. (2009) Optimisation of resource allocation can explain the temporal dynamics and honesty of sexual signals.