This is a printer version of an UnderwaterTimes.com article.
To view the article online, visit: http://www.underwatertimes.com/news.php?article_id=21080437156 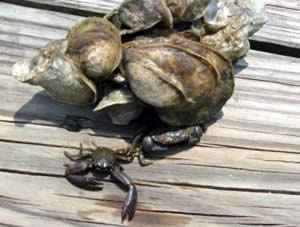 Two green porcelain crabs are shown among oyster shells. The non-native crabs are filter feeders and may compete with oysters and mussels for food.

ATLANTA, Georgia -- A dime-sized tropical crab that has invaded coastal waters in the Southeast United States is having both positive and negative effects on oyster reefs, leaving researchers unable to predict what the creature’s long-term impact will be.

Unlike native crabs that eat baby oysters, mussels and fish, the green porcelain crab Petrolisthes armatus is a filter feeder, extracting its food from the water much as oysters do.

The fast-reproducing invader therefore isn’t directly attacking oyster populations, though it may be competing with them for food – and may impact the predators that normally attack the oysters.

Researchers at the Georgia Institute of Technology have spent more than three years studying the effects of the crab, and are reporting their findings in the journal Biological Invasions. The research, believed to be the first to document effects of the crab on oyster and mussel populations off the Southeast coast, was supported by the U.S. Environmental Protection Agency, the National Oceanic and Atmospheric Administration, and the Harry and Linda Teasley Endowment to Georgia Tech.

The impact of the crabs is important because oysters are a “foundation species” essential to the health of coastal ecosystems because their reefs provide homes to dozens of other creatures.

“These non-native crabs slow the rate of growth for organisms like oysters that they compete with, but they enhance the ability of those same organisms to survive when young,” Hay noted. “They are probably competing with the oysters for food, but the native crabs have switched to eating these green porcelain crabs rather than eating the baby oysters. Even though their growth is suppressed, the baby oysters are not being attacked as much now by the native consumers.”

Though the crabs aren’t killing existing populations of oysters, their long-term impact could still be significant. For instance, Hay noted, their availability as food could potentially increase the population of native crabs, disrupting the delicate balance between those predators and the oysters.

But assessing the long-term impact of the crabs has been difficult because the creatures reproduce and grow rapidly, flooding the shallow coastal waters with their young. In research conducted off Skidaway Island and Sapelo Island on the Georgia coast, the researchers found “extraordinarily high” populations of the crab – as many as 11,000 individuals per square meter.

To assess the impacts of the non-native crab population, graduate student Amanda Hollebone placed oysters and mussels into large baskets and located them on mud flats away from existing oyster reefs. Some of the baskets contained only oysters and mussels and were intended to serve as controls, some had a community of oysters, mussels, oyster drills and native mud crabs, while others had the same community spiked with non-native crabs. The distance from the existing oyster reefs was expected to prevent adult green porcelain crabs from reaching the baskets.

“You get a true understanding of the sheer densities of these crabs only when you actually pick up or dig through clumps of oysters and oyster shell hash,” said Hollebone, who is now a temporary assistant professor at Georgia Southern University in Statesboro. “Particularly in the summer months, I was never able to find a patch of oysters in the Savannah area that did not have the green porcelain crab.”

Because the green porcelain crabs quickly took over the control baskets, the researchers only had valid comparison data for 4-6 weeks. However, information from their baskets supported the observations made under more controlled – but less natural – conditions at Georgia Tech’s laboratory at the Skidaway Institute of Oceanography near Savannah.

As in the lab experiments, the researchers found that the crabs slowed the growth of small oysters, but not small mussels -- another common filter-feeder.

The long-term effects of the massive crab population are difficult to predict. Their large numbers could lead to population growth among the native crabs and fish that now prefer eating them instead of their normal diet. But if the predator population should grow large enough to control the non-native crabs, that could lead to a decline in their numbers – and force the predators back to their traditional prey of oysters and mussels.

“We’re not sure what’s going to happen,” Hay said. “We can’t really raise the alarm because we don’t have the data to say these crabs are doing something bad. It’s possible that they will not have a huge effect at all.”

Long-term observation of the oyster reefs may ultimately provide answers. “We have observed both positive and negative impacts on oysters and oyster-related biota at small scales, but we cannot definitively answer our concerns about oyster reefs at larger scales,” Hollebone added. “With continued monitoring of large expanses of reefs, we may begin to understand the long-term, large-scale effects.”

The green porcelain crabs were observed in Florida during 1990s, but have since appeared in large numbers in coastal waters of Georgia and South Carolina. Researchers don’t know if they hitched a ride northward in the ballast of ships, whether warming water temperatures encouraged a northerly migration – or both.