This is a printer version of an UnderwaterTimes.com article.
To view the article online, visit: http://www.underwatertimes.com/news.php?article_id=21048796053 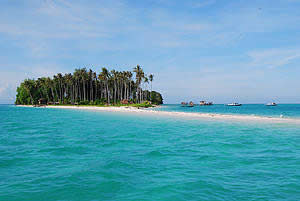 Sibuan Island, off the coast of Malaysia Â© WWF-Malaysia/Nina Ho

Semporna is unusual because of its rich mix of reef types, representing 5 major geomorphological reef types. Such areas usually have high levels of biodiversity because of the mix of habitat types and ecosystems. There are also strong indications that that the Malaysian Semporna area, together with the Indonesian Berau region, share some rare and unique species.

The survey is based on comparable methodologies that have been used in many areas of Indonesia, Papua New Guinea, the Philippines and Solomon Islands since 1998. There are only very few examples of similar studies being done previously in Malaysia. There is a need to document the coral and fish richness of all of Malaysia's reefs to clarify the relationship with the existing definition of the Coral Triangle.

The overall objectives of the expedition are threefold: First, to assess the coral reef biodiversity; second, to assess the coral reef status and reef population health; and, third, to enhance conservation and outreach efforts through better understanding of the marine ecosystems of Semporna. A modified Reef Check methodology and reef profiling will be used at each site for two depths, in order to take a "snapshot" of the reef health.

Jointly leading the expedition are Dr. Bert Hoeksema of NCB Naturalis, Leader of the Biodiversity Team, and Affendi Yang Amri of UM, Leader of the Coral Reef Status Team. Other expedition participants include marine scientists from USA, UMS, and other researchers from the Netherlands, Universiti Kebangsaan Malaysia (UKM), Universiti Malaysia Sarawak (UNIMAS) and Sabah Parks.

Follow the expedition blog, where the expedition members will update their daily work and share new findings, as well as their stunning images and short videos. Visit: www.ncbnaturalis.nl

The preliminary results of the expedition will be announced at a press conference in Kota Kinabalu on 20 December 2010.

The Semporna Marine Ecological Expedition is made possible in part by funding from Adessium Foundation.