This is a printer version of an UnderwaterTimes.com article.
To view the article online, visit: http://www.underwatertimes.com/news.php?article_id=16928451030 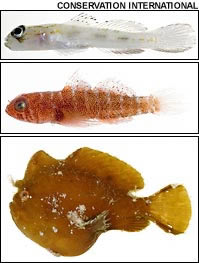 SABA ISLAND, Netherlands Antilles -- An underwater mountain that forms the world's third-largest atoll has some of the richest diversity of marine life ever found in the Caribbean, according to scientists who recently explored the area.

The two-week expedition in January encountered new species of fish, seaweed and other ocean life at little-studied Saba Bank Atoll, a coral-crowned seamount 250 kilometers southeast of Puerto Rico in the Dutch Windward Islands.

In a series of dives buffeted by high winds and strong currents, scientists from Conservation International (CI), the Netherlands Antilles government and Smithsonian Institution's Museum of Natural History found scores more fish species than previously known in the region and vast beds of diverse seaweed, including a dozen or more possible new species.

"We discovered a new species literally every day we were there," said Michael Smith, director of CI's Caribbean Biodiversity Initiative. Among the apparent new fish species found were two types of gobi, while the total number of fish species recorded reached 200, compared to fewer than 50 before the expedition.

The unprecedented richness of marine life and vulnerable status of the atoll's coral beds make Saba Bank a prime candidate for designation as a Particularly Sensitive Sea Area (PSSA) under the International Maritime Organization (IMO).

Mark Littler, marine botanist of the Smithsonian Institution's National Museum of Natural History, declared Saba Bank the richest area for seaweeds in the Caribbean basin, including as many as a dozen new species along with commercially valuable species that will facilitate the creation of economic activity zones under PSSA designation.

Paul Hoetjes, marine biologist with the Ministry of Nature Affairs for the Netherlands Antilles (MINA), called the expedition crucial to getting the area protected to benefit local populations.

"The community of about 1,500 people on nearby Saba Island derives a large part of its economy from the atoll, and the atoll is being damaged," Hoetjes said.

A petroleum trans-shipment depot on neighboring St. Eustatius Island causes significant marine traffic, including oil supertankers in the area around the submerged atoll. The fragile ecosystems of Saba Bank get damaged by anchors and chains of ships that wait at the atoll to avoid anchoring fees in territorial waters of St. Eustatius.

The large ships also endanger local fishermen of Saba in their small boats, forcing them away from traditional fishing grounds and causing the loss of fish pots that become so-called ''ghost traps" that harm fish stocks.

"Some of the scientists actually found new species not located anywhere else," Peterson said. "There should be no-anchor zones. For things to survive there must be stricter controls."