This is a printer version of an UnderwaterTimes.com article.
To view the article online, visit: http://www.underwatertimes.com/news.php?article_id=15428106970 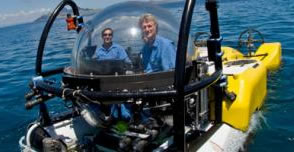 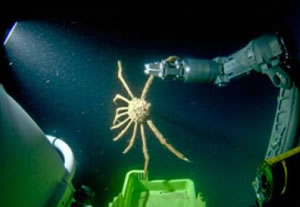 A spider crab (Miopsis panamensis) collected with the robotic arm of the DeepSee submersible at a depth of 130 meters. Credit Scripps

SAN DIEGO, California -- Scientists from Scripps Institution of Oceanography at UC San Diego returning from research expeditions in Mexico have captured unprecedented details of vibrant sea life and ecosystems in the Gulf of California, including documentations of new species and marine animals previously never seen alive. Yet the expeditions, which included surveys at unexplored depths, have revealed disturbing declines in sea-life populations and evidence that human impacts have stretched down deeply in the gulf.

In one expedition, researchers Exequiel Ezcurra, Brad Erisman, and Octavio Aburto-Oropeza traveled on a three-person submarine to explore marine life in the Gulf of California's deep-sea reefs and around undersea mountains called seamounts.

The DeepSee submersible gave the researchers unique access to environments below 50 meters (164 feet), depths virtually unknown in the gulf because of their inaccessibility below scuba diving levels.

"The synergistic collaboration between Scripps researchers and the San Diego Natural History Museum was the driver of this wonderful endeavor," said Ezcurra. "We were able to raise the funds for the boat and the DeepSee submersible in record time, allowing us to invite some of Mexico's top marine scientists to join the team. The long tradition of binational cooperation nurtured by the museum in its 134 years of life was instrumental in this collaborative development."

Scientists at universities in Mexico are now conducting detailed genetic and morphological (form and structure) investigations to determine the species status of various animals.

But along with the excitement of discovery came disturbing signs of human impacts in the gulf's depths, and, in particular, signals that overfishing has decimated ecosystems. Large schools of fish documented in earlier expeditions at locations such as El Bajo seamount have vanished. The researchers also say depths at comparable areas, such as Cocos Island off Costa Rica, reveal much more marine life and healthier ecosystems than those studied in the Gulf of California that are impacted by fishing and pollution.

"The human impacts in shallow areas have been well documented, but our observations make it clear that we are reaching down deeper and modifying the deeper ecosystems and their communities as well," said Aburto-Oropeza. "We have lots of evidence of ghost nets with trapped animals at many depths, along with pollution, including beer cans, in each deep location we studied."

The researchers hope their findings will reach beyond scientific circles and be incorporated into conservation and management plans to restore healthy marine-life populations and promote sustainable fisheries in the gulf.

Although the evidence of human encroachment was plentiful, the researchers also traveled to remote locations where sea populations thrived, destinations where human impacts are reduced or virtually non-existent. Such was the case at Las Animas, a seamount tucked halfway between Loreto and La Paz. At its location buffered from urban impacts, Las Animas suffers minimally from fishing and human activities.

During a separate expedition completed in October, Erisman and Aburto-Oropeza studied marine life at Cabo Pulmo, a protected national park near the southern tip of the Baja peninsula. Here again the researchers documented a "biodiversity hotspot" with thriving fish populations and a rich mix of sea life in the absence of human environmental pressures. They witnessed large tiger sharks, now a rarity in Baja California.

Erisman and Aburto-Oropeza say Las Animas and Cabo Pulmo, contrasted by the relatively depleted sea life witnessed at locations such as El Bajo, are examples of "shifting baselines," the concept promoted by Jeremy Jackson, director of the Scripps Center for Marine Biodiversity and Conservation, and others. The term describes the deterioration of standards and failing to realize how much has changed over years and generations.

"At Las Animas and Cabo Pulmo, we have seen that if you leave areas without human pressure, the elements of the environment will allow them to rebound to a previous, more healthy ecosystem state," said Aburto-Oropeza.

"These expeditions far exceeded what we expected," said Erisman. "From the first dive, the results escalated in success as I witnessed a hundred times more organisms than I expected. It was amazing and we are excited about the possibilities."

The custom-built DeepSee submersible, owned by expedition co-leader Steve Drogin, a San Diego photographer and marine explorer, allowed the scientists to survey marine life with its 360-degree-view glass dome. The researchers concentrated on marine life between 50 and 300 meters (164 and 984 feet), although DeepSee is capable of reaching 475 meters (1,500 feet).

Another startling discovery came in September on a separate expedition when Drogin and his colleagues discovered a hydrothermal vent just south of Loreto at a depth of 450 feet. Drogin reported dramatic views around the vent and water temperatures reaching 266 Fahrenheit degrees (130 degrees Celsius).

"It felt to me like walking into the middle of a forest fire, with flames shooting out. It was very dramatic," said Drogin