This is a printer version of an UnderwaterTimes.com article.
To view the article online, visit: http://www.underwatertimes.com/news.php?article_id=13748095621 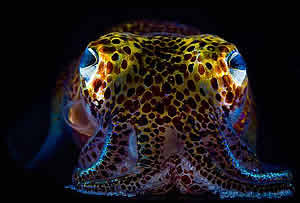 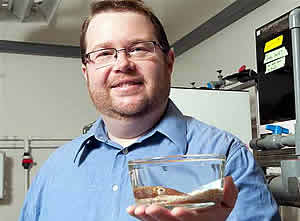 MANSFIELD, Connecticut -- Bacteria generally have a bad reputation – they’re good only for causing disease, and are best avoided.

But Spencer Nyholm of the molecular and cell biology department in the College of Liberal Arts and Sciences sees things differently.

“More than 90 percent of the cells in our bodies are bacteria,” Nyholm points out. “Some live on our skin, and many live in our intestines, providing vitamins and aiding us in digestion.”

These mutually advantageous relationships, called beneficial symbioses, occur when a symbiont, such as a bacterium, lives within and exchanges resources with a host animal or plant. Nyholm’s research on one particular beneficial symbiosis is not only exciting in a visual sense – he studies a glowing squid – but is helping scientists understand how immune systems distinguish friend from foe.

The relationship that Nyholm and his students study involves the tiny Hawaiian bobtail squid and its symbiotic bacterium, Vibrio fisheri. The two-inch-long squid live in the central Pacific, near coral reefs in shallow sand flats, where they bury themselves in the sand during the day and come out at night to feed and reproduce. The bacteria float freely in the ocean water, but when they find themselves in large groups, they produce light.

During their first few days of life, the nocturnal squid take advantage of this bioluminescence by collecting a population of the bacteria into a specialized light organ within their bodies. The aggregated bacteria light up the animal’s underside, which helps to defend the squid from predators, says Nyholm.

“These squid don’t have a lot of defenses: they’re small and they’re soft,” he says. “So they use light to protect themselves.”

By producing light on their undersides, says Nyholm, their silhouettes blend in with the moonlight above, making it difficult for predators below, such as fish, seals, and sharks, to see them. In return, the squid provides nutrients and a safe haven to the bacteria.

Each morning, however, as the squid are settling down to sleep, they spit out about 95 percent of the Vibrio bacteria into the surrounding water. Why would the squid effectively rid themselves of a perfectly good defense mechanism?

There are two main reasons, says Nyholm. First, as the bacteria age, they might become toxic to the squid. Secondly, releasing the bacteria bolsters the number of free-living Vibrio, so baby squid have a stock of bacteria to draw from.

Besides, Nyholm points out, a 95 percent population reduction is nothing for bacteria. After expulsion, the remaining 5 percent of the squid’s bacteria replicate throughout the day and by the time the sun sets, the squid is re-equipped with a full 100 percent.

The squid’s unusual life cycle isn’t the only reason this symbiosis is interesting to scientists. In a recent paper published in the Proceedings of the National Academy of Sciences, Nyholm and his colleagues show that this daily rhythm is tightly woven into the organisms’ genetics, and suggest that the same might be true for bacteria in the guts of humans and other mammals.

Nyholm also recently received a grant of more than $600,000 from the National Science Foundation to study the squid’s immune system. Unlike many symbioses – for example, in the human gut, which contains hundreds of different beneficial species of bacteria – these squid maintain a relationship with only one species. When baby squid collect bacteria from seawater, their immune cells need to know which bacteria to accept and which to destroy.

“In this case, we can study how the specific bacteria and host communicate with each other,” Nyholm says. “This can tell us a lot about immune system function and how it distinguishes beneficial from harmful bacteria. It helps us to tease apart the conversation between blood cells and symbionts.”

Although Vibrio fisheri are beneficial to squid, a closely related bacterium, Vibrio cholerae, causes cholera in humans. Nyholm hopes that his work will help to discover what characteristics of this group of bacteria are potentially harmful.

“Understanding how the squid immune system reacts to Vibrio bacteria can help us understand how other animals interact with both beneficial and disease-causing microbes,” he says. “The genes of communication appear to be similar for good and bad associations, but the mechanisms of implementation are likely different.”