This is a printer version of an UnderwaterTimes.com article.
To view the article online, visit: http://www.underwatertimes.com/news.php?article_id=12975463801 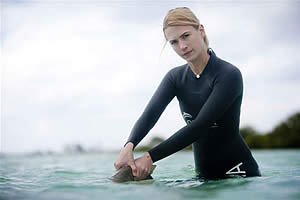 WASHINGTON, D.C. -- Oceana launched a new public service announcement (PSA) campaign today that features Golden Globe nominee January Jones swimming with sharks. Jones is best known for her role in the American Movie Channel’s (AMC) critically acclaimed Emmy, Golden Globe and SAG Award-winning series “Mad Men.” Titled “Scared for Sharks,” the PSAs have been published in several magazines leading up to World Oceans Day on June 8, and will continue to run through the summer as online banners and 30-second TV and radio spots.

The PSAs were produced in February 2009 when Jones joined Oceana at the Bimini Biological Field Station, also known as "The Shark Lab,” in the Bahamas. Jones’ Scared for Sharks ads feature her swimming with sharks and holding juvenile sharks as part of the Lab's research to learn more about local populations. The PSAs show that sharks are uninterested in people and that in reality we should all be scared for sharks because their populations are being decimated around the world.

“I am so ecstatic to be a face for Oceana's shark campaign and help make a difference for these magnificent creatures,” said Jones. “After interacting with sharks at such close proximity, I believe now, more than ever, that they carry a stigma with them that is so unnecessary.”

Shark populations worldwide face severe threats from overfishing. Drastic declines in shark populations have occurred in recent years, with some populations now depleted by more than 90 percent in just the past few decades. As apex, or top predators of the sea, many shark species are a necessary component to maintaining a complex ecosystem full of diversity and life. Sharks feed on the animals below them in the food web, helping to regulate and maintain the balance of life in the ocean. They can also indirectly control the health of coral reefs and the health of seagrass beds, and ultimately, bottom dwelling communities.

“I think spreading the word about the negative effects humans are having on sharks is crucial,” added Jones. “I hope as a result of this campaign, the public will become more engaged in Oceana’s work -- it’s an amazing organization with amazing contacts, scientists and supporters – a truly inspired and motivated group of people.”

To date, Oceana’s print ads featuring Jones have been published in American Prospect, Arrive, Boho, Endless Vacation, Forbes, InStyle and Travel + Leisure. Oceana’s print and online ads along with their 30 second TV and radio spots can be found on Oceana’s new web page devoted to its partnership with Jones at www.Oceana.org/scaredforsharks. In addition to allowing media to easily access the PSAs, the site also gives visitors the opportunity to:

Oceana is hard at work in Europe and the United States to protect sharks. In Europe, Oceana won a commitment earlier this year from Spain, one of the world’s largest shark fishing nations, to ban hammerhead and thresher shark fishing. In the United States, Oceana has promoted the passage of comprehensive shark legislation that would close loopholes that facilitate shark finning and establish the U.S. as a global leader in shark protection. The House of Representatives passed the Shark Conservation Act of 2009 in March. Oceana now looks to the Senate for fast passage of this important piece of legislation.