This is a printer version of an UnderwaterTimes.com article.
To view the article online, visit: http://www.underwatertimes.com/news.php?article_id=12360810497 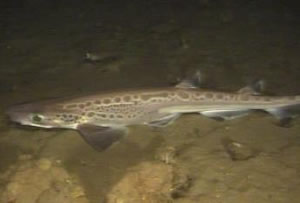 Caption: Sharks from the deep waters of the Cantabrian Sea are opportunist hunters. credit OCEANA

MADRID, Spain -- A team of Spanish researchers has studied the diet of three species of sharks living in the deep waters in the area of El Cachucho, the first Protected Marine Area in Spain, which is located in the Cantabrian Sea off the coast of Asturias. These animals feed on the resources available in their environment, according to changes taking place in the ocean depths.

"All the sections of the food chain are inter-related in these deep-sea ecosystems, and a small change in any one of the links in this chain can cause great changes in the rest", Izaskun Preciado, lead author of the study and a researcher at the Oceanographic Centre in Santander, which is run by the Spanish Institute of Oceanography (IEO), tells SINC.

In order to gain a detailed understanding of the species that inhabit El Cachucho (Spain's first Protected Marine Area located off the coast of Llanes in Asturias), the scientists studied three species of shark that live at depths of between 400 and 1,000 metres, the blackmouth catshark (Galeus melastomus), the velvet belly lantern shark (Etmopterus spinax), and the birdbeak dogshark (Deania calcea).

The researcher says the results of the study, which has been published in the Journal of Fish Biology, showed that "the sharks' diet is opportunist, because they feed off whatever resources are available, in this case small euphausiid crustaceans, benthopelagic prawns and fish".

The samples gathered between October 2003 and April 2004 made it possible to define two different habitats – the top of the bank, at a depth of 454 to 642 metres and covered with a fine layer of sediments with a low percentage of organic material, and the interior of the inner basin, which separates the bank from the continental shelf, at a depth of between 810 and 1,048 metres.

In the deepest waters, the scientists sampled down to a depth of 1,100 metres and found that the blackmouth catshark and the birdbeak dogshark coexist there without any trophic competition between them, "since each one has specialized to eat a particular kind of food", says the oceanographer.

Predicting changes in the trophic chain

The team stresses the importance of these studies in monitoring species in the El Cachucho area. "It is likely that the establishment of the Protected Marine Area will cause changes in the abundance of certain species of fish, above all commercial ones. For this reason, understanding the trophic network of these ecosystems will help us to predict future changes in the abundance of species", explains Preciado.

The researcher warns: "A significant increase in a predator species could lead to a drastic decline in its prey, and so understanding the dynamics of the trophic networks will help us to predict changes in each of the sections of the ecosystem".

The presence of larger blackmouth catsharks in shallow waters, for example, is a good indicator of higher levels of zooplankton production in these areas.

El Cachucho is an undersea mountain located in the Cantabrian Sea, off the coast of Asturias. At around 4,500 metres in height (measured from its base on the deep-water plain of the Bay of Biscay), it has great faunal and biological wealth. It is the first exclusively marine reserve in Spain. To date, only parks such as DoÃ±ana, Cabrera and the Atlantic Islands of Galicia had extended their protection to include part of the maritime environment.