This is a printer version of an UnderwaterTimes.com article.
To view the article online, visit: http://www.underwatertimes.com/news.php?article_id=12351068409 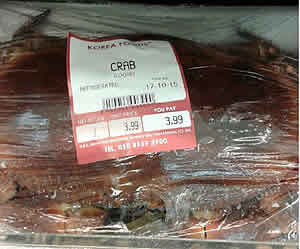 Crustacean Compassion has launched a campaign to gain legal protection for decapod crustaceans, like this shrink wrapped live crab.

LONDON, England -- Despite a marked increase in scientific evidence about the ability of decapod crustaceans to feel pain and suffer, there has been no government assessment of their welfare and no increase in protections for animals like crabs and lobsters, which in some shocking instances has resulted in them being left fully immobilized in plastic shrinkwrap on supermarket shelves in the UK.

A new animal welfare group Crustacean Compassion has been set up to tackle this issue, and is launching today with a petition to DEFRA Minister George Eustice, which aims to bring the UK's treatment of these animals in line with other countries including Switzerland, New Zealand and Norway. A request made under the Freedom of Information Act by the group has revealed that despite significant media coverage[i] of relevant scientific research in recent years, no assessment has been conducted by DEFRA of the ability of decapod crustaceans to feel pain, and no codes of practice have ever been developed by the government to ensure humane slaughter practices.

An EU animal welfare panel claimed as far back as 2005 that many of the ways in which crustaceans are currently treated in the food industry are inhumane [ii]. Crustacean Compassion believes that legislation to protect them from unnecessary suffering is overdue, and their petition calls for an amendment to the Animal Welfare Act 2006 (England and Wales) to include decapod crustaceans in its definition of 'animal' which would give them legal protection from cruelty.

Currently there is no legal requirement for food processors and restaurants to take account of decapod crustaceans' welfare needs. Lobsters boiled alive can take up to three minutes to die[iii]. Whilst an experience of pain is impossible to conclusively prove in any animal, evidence of crustacean sentience has been debated for decades. Most recently, research conducted at the University of Belfast[iv] showed that crustaceans appeared to lay down memories of a painful stimulus and to weigh up the risks and benefits of avoiding it, behavior the authors claimed[v] was consistent with an experience of pain, rather than a mere 'reflex response'.

In response to public concerns , some UK restaurants and supermarkets such as Waitrose and Tesco already electrically stun some of their crustaceans before slaughter. Including decapods in the Animal Welfare Act 2006 (England and Wales) would ensure that anyone farming them, storing them or slaughtering them would have to abide by basic animal welfare principles: enough food, a suitable environment, and protection from unnecessary pain and suffering at slaughter.

Crustacean Compassion's Campaign Director, Maisie Tomlinson says: "We believe that it is unfair, unscientific and legally inconsistent that the Animal Welfare Act excludes decapod crustaceans, given what is now known about their ability to feel pain. The Act explicitly states that invertebrate animals can be included under the definition of 'animal' if there is sufficient evidence of pain and suffering".

"We urge George Eustice to amend the Animal Welfare Act 2006 to include these sentient, sensitive creatures under its protections so that responsible food businesses can do the right thing."