This is a printer version of an UnderwaterTimes.com article.
To view the article online, visit: http://www.underwatertimes.com/news.php?article_id=11020537894 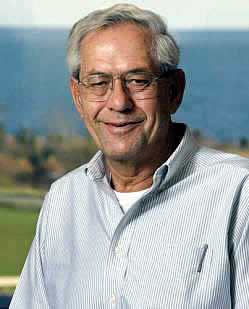 ruce A. Warren says his love of the ocean motivated him throughout his career. (Tom Kleindinst, Woods Hole Oceanographic Institution)

WOODS HOLE, Massachusetts -- Bruce A. Warren-- one of the world's pre-eminent researchers of deep ocean currents and scientist emeritus at the Woods Hole Oceanographic Institution (WHOI)—is the 2010 winner of the prestigious Sverdrup Gold Medal, awarded by the American Meteorological Society (AMS).

In announcing the award, the AMS cited Warren "for advancing our understanding of the general circulation of the ocean through observations and dynamical interpretation." Warren and his co-workers over the years are considered primarily responsible for discovering the existence of deep, swift currents near the boundaries of the Indian and Pacific oceans.

Warren will receive the medal-- named for oceanography pioneer Harald Ulrik Sverdrup --in Atlanta at the Society's annual meeting Jan. 17-21.

In reflecting on a lifetime of work, the oceanographer said what he values most are not the practical implications of his discoveries, but the joy of ocean research itself. "It's a wonderful thing to have the opportunity to explore the natural world," he says. "I just don't think about things like…practical value."

Nevertheless, Warren concedes the scientific importance of his work. The discovery of such deep ocean currents "helps in predicting what oceans will be like in the future," he says, and has important implications for ocean life, and the ocean's relation to land and to climate.

"Bruce's approach to oceanography encompasses many domains, including air-sea interactions to explain the formation of major water masses, dynamics to explain the flow and structure of major deep ocean currents, and the discovery of unknown elements of ocean circulation," says Kevin Speer, professor of oceanography at Florida State University. "These are all subjects of key importance to our basic knowledge of the ocean and its role in climate."

Speer likens Warren to Sverdrup himself, who is recognized as the founder of the modern school of oceanography and "whose discoveries will never go out of date," Speer says.

Perhaps more than anything, it is Warren's love of pure research, done on ships at sea, that has driven him ever since his first summer job on the Woods Hole campus as an Amherst College undergrad in the early 1950s. "Before working summers at Woods Hole, I'd never heard of oceanography before." So why work at Woods Hole in the first place? "The Cape," he admits, "was a really nice place to spend the summer."

Oceanography so grabbed his attention that Warren went on to earn his PhD at MIT in physical oceanography. "I was one of the first [at MIT] to get such a degree," he says. "They asked me what I wanted to call it. They let me name my own degree."

At WHOI, Warren got to do what he had dreamed of since his first summers on Cape Cod. "What attracted me to the field at first was that I liked going out to sea; I liked being at sea [in] the company of people who like going to sea. And I found that there were opportunities to use simple physics to find out interesting things about the ocean."

"But if you didn't go to sea in ships, it would cease to be oceanography."

Which is why Warren wistfully regrets laments what he sees as at least part of oceanography drifting away from that notion in favor of working in labs to produce large-scale numerical-circulation models, however necessary they are for the advancement of the science.

"To some extent these days it isn't so much about ships anymore," he says. "You are separated from the object of your study."

And it is also why he is grateful to have done his work when he did, and to be recognized for it with such a significant award. "It was very reassuring to me to get this recognition," he says. "And it's reassuring to find that somebody else thinks your work interesting too."

Warren's colleagues and associates share his gratitude, including Speer, whose master's thesis adviser was Warren. "It gives me great pleasure to learn that Bruce has been awarded this medal," Speer says. "It shows that the larger community has come to appreciate his profound contributions to our understanding of the ocean, both with novel observations and solid and straight-forward physics."

Adds Arnold L. Gordon, professor of oceanography at Columbia University and associate director of the Division of Ocean & Climate Physics at Columbia's Lamont-Doherty Earth Observatory, "Bruce combines quantitative vigor with creative insight to produce ground breaking advances in our view of the ocean that stands the test of time."

Warren appreciates the accolades, but his priorities may best be reflected in a quote from Arctic explorer Fridtjof Nansen, which he keeps close to his desk:

"The history of the human race is a continual struggle from darkness toward light. It is of no purpose to discuss the use of knowledge. Man wants to know, and when he ceases to do so he is no longer man."