This is a printer version of an UnderwaterTimes.com article.
To view the article online, visit: http://www.underwatertimes.com/news.php?article_id=10987325104

Cold, Salty And Promiscuous -- Gene-Shuffling Microbes Dominate Antarctica's Deep Lake; 'There Is So Much Stuff In There'
Underwatertimes.com News Service
September 30, 2013 20:50 EST 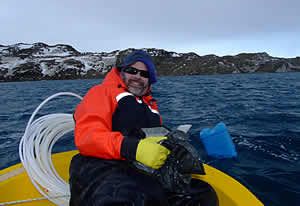 WALNUT CREEK, California -- Sequestered in Antarctica's Vestfold Hills, Deep Lake became isolated from the ocean 3,500 years ago by the Antarctic continent rising, resulting in a saltwater ecosystem that remains liquid in extreme cold, and providing researchers a unique niche for studying the evolution of the microbes that now thrive under such conditions. Deep Lake's microscopic inhabitants are dominated by haloarchaea, microbes that require high salt concentrations to grow and are naturally adapted to conditions â at minus 20Â°C â that would prove lethally cold to other organisms. In a detailed analysis published online the week of September 30, 2013 in the journal Proceedings of the National Academy of Sciences (PNAS), researchers have, for the first time, been able to get a complete ecological picture of the Deep Lake microbial community.

A team led by Rick Cavicchioli of the University of New South Wales, Australia partnered with the U.S. Department of Energy Joint Genome Institute (DOE JGI) to generate sequence data from DNA isolated from individual microbes and compared them with metagenomic (microbial community) information sampled at various depths of Deep Lake.

"Understanding how haloarchaea can thrive in Deep Lake could be used to develop engineering concepts for reducing energy costs in a variety of situations, such as for cleaning up contaminated sites in permanently or seasonally cold regions," Cavicchioli said. Owing to the ability of salt-loving enzymes to function under extremes, he suggests they could also be used as catalysts for peptide synthesis and enhanced oil recovery, and can function in water-organic solvent mixtures. "These enzymes will be especially useful for transforming contaminated sites with particularly high levels of petroleum-based products," he added.

Deep Lake's extremes have rendered the microbial neighborhood rather homogeneous. Four isolates in the study represented about 72 percent of the cells in the community. Though gene exchange across species boundaries is considered infrequent, the researchers observed that haloarchaea living in the Lake's hypersaline environment practice it comparatively often, like neighbors "chewing the fat" in a small-town coffee klatch. "It's intriguing that while gene exchange is rampant, species lineages appear to be maintained by virtue of each species having a high level of specialization, enabling niche partitioning and peaceful coexistence," said Cavicchioli of their findings. "Haloarchaea are known for being 'promiscuous,' that is, prone to exchange DNA between themselves. Our study demonstrated that this exchange occurs at a much higher level than has previously been documented in nature. They communicate, share, specialize, and coexist."

What distinguishes this "conversation" is that the haloarchaea of Deep Lake exchange the information of DNA not just between species but among distinct genera, and moreover in huge tranches, some 35,000 letters of code, with not a letter out of place. While it may be slow, that give-and-take is chock full of essential information and the word gets around the community. "The long stretches of highly identical shared sequence between the different lake organisms spurred a strong suspicion of potential cross-contamination at first," said Tanja Woyke, Microbial Program Lead at the DOE JGI and co-author of the study. "By painstaking validation of the manually finished and curated genomes, however, we were able to exclude any process-introduced artifacts and confirm that this is true inter-genera gene exchange."

Cavicchioli noted that, "as the content being shifted around lack core genes, it speaks to these microbes' ability to be flexible and collaborative. This shuttled gene content could confer such benefits as resistance to viruses or bolster their ability to respond to specific environmental factors. Moreover, the markers that we analyzed indicated that a high level of gene exchange occurs throughout the Deep Lake community."

One particular microbial player, dubbed tADL, represented about 44 percent of the cell content of the lake community, which is one of the least productive environments on the planet with respect to synthesis of organic compounds from carbon dioxide. Most life on earth is dependent on this process, but microbial life in Deep Lake has only six generations of cell division annually, so tADL's comparatively "high energy" metabolism makes it adept at degrading carbohydrates, with a particular taste for glycerol, a natural byproduct of the light-harvesting algae. "A key thing about what they eat is that by choosing different food sources they can coexist and continue to reproduce and eke out a living in relative harmony," said Cavicchioli.

Cavicchioli acknowledged that the PNAS paper represents the synthesis of the more striking findings that arose from merging and analyzing collective data sets that have been assembled over the last eight years. Along the way, a major milestone logged was the genome sequencing and analysis of the first member of the archaeal branch of the tree of life ever isolated from a polar environment.

"Every time we 'poke an omics stick' in there we find things we never expected," Cavicchioli said. "Each lake also has its own unique characteristics, so there is a lot more to be discovered. These Antarctic expeditions represent big logistical investments, with millions in funding from the Australian Antarctic Division and the Australian Antarctic Science Program leveraging the powerful resources of JGI. As a long-term investment strategy, this has proven to be an excellent model of how a flexible group of clever scientists can provide a sure path for enabling strong science to come to fruition."