This is a printer version of an UnderwaterTimes.com article.
To view the article online, visit: http://www.underwatertimes.com/news.php?article_id=10956430128 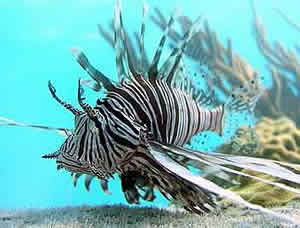 EXUMA, The Bahamas -- Their numbers continue to expand. They are spreading throughout the Caribbean Sea. Eradication appears almost impossible. Even limited amounts of control will be extremely difficult, and right now the best available plan is to capture and eat them.

Such is the desperate status of the lionfish wars, an invasion of this predatory fish from the Pacific Ocean into the Bahamas and Caribbean region that threatens everything from coral reef ecosystems to the local economies, which are based on fishing and tourism.

With a new three-year, $700,000 grant from the National Science Foundation â under the American Recovery and Investment Act â scientists from Oregon State University are urgently trying to address a looming crisis.

"This is a new and voracious predator on these coral reefs and it's undergoing a population explosion," said Mark Hixon, an OSU professor of zoology, expert on coral reef ecology and leader of the research effort. "The threats to coral reefs all over the world were already extreme, and they now have to deal with this alien predator in the Atlantic. Lionfish eat many other species and they seem to eat constantly."

OSU research has already determined that within a short period after the entry of lionfish into an area, the survival of small reef fishes is slashed by about 80 percent.

Aside from the rapid and immediate mortality of marine life, the loss of herbivorous fish will also set the stage for seaweed to potentially overwhelm the coral reefs and disrupt the delicate ecological balance in which they exist.

This newest threat follows on the heels of overfishing, sediment deposition, nitrate pollution in some areas, coral bleaching caused by global warming, and increasing ocean acidity caused by carbon emissions. Lionfish may be the final straw that breaks the back of Western Atlantic and Caribbean coral reefs.

Contrary to their status in native Pacific Ocean waters, lionfish have virtually no natural enemies in the tropical Atlantic Ocean. Whatever is keeping them in check in the Pacific â and scientists are trying to find out what that is â is missing here. In the Caribbean, they are found at different depths, in various terrains, are largely ignored by local predators and parasites, and are rapidly eating their way through entire ecosystems.

A primary concern, according to local experts, is the degradation of coral reefs and loss of food fish and colorful tropical species. Tourism, fishing and diving will suffer in some economies that are largely based on these fishes. One group has called lionfish a plague of Biblical proportions stalking the Bahamian economy.

"Until we can develop a better understanding of this invasion, one of the few control mechanisms may be to develop a market for them as a food fish," Hixon said. "Lionfish are pretty easy to catch, taste good and could be advertised as a conservation dish."

Efforts by OSU researchers to feed lionfish to large groupers and sharks have so far been unsuccessful â they don't look like conventional prey, and venomous spines that leave a painful wound are a strong deterrent.

Lionfish, native to the tropical Pacific and Indian Oceans, have dramatic coloring and large, spiny fins. It's believed they were first introduced into marine waters off Florida in the early 1990s from local aquariums or fish hobbyists. They have since spread across much of the Caribbean Sea and north along the U.S. coast as far as Rhode Island.

In studies on small coral reefs in the Bahamas, Hixon and his graduate student Mark Albins determined that a single lionfish per reef reduced young juvenile fish populations by 79 percent in only a five-week period. Many species were affected, including cardinalfish, parrotfish, damselfish and others. One large lionfish was observed consuming 20 small fish in a 30-minute period. Lionfish are carnivores that can eat other fish up to two-thirds their own length.

When attacking another fish, Hixon said, a lionfish uses its large, fan-like fins to herd smaller fish into a corner and then swallow them in a rapid strike. Because of their natural defense mechanisms they are afraid of almost no other marine life. And the venom released by their sharp spines can cause extremely painful stings to humans, or even fatalities for some people with heart problems or allergic reactions.

"We have to figure out something to do about this invasion before it causes a major crisis," Hixon said. "We basically had to abandon some studies we had under way in the Atlantic on population dynamics of coral reef fish, because the lionfish had moved in and started to eat everything."