This is a printer version of an UnderwaterTimes.com article.
To view the article online, visit: http://www.underwatertimes.com/news.php?article_id=10953746180 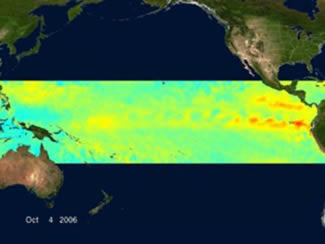 The most recent 10-day average of SST anomalies derived from Aqua/AMSR-E SST measurements.

Visualizers at NASA's Scientific Visualization Studio at NASA's Goddard Space Flight Center, Greenbelt, Md. have created two products. The first is a daily update of actual sea surface temperatures. Whenever clouds in the satellite data block the sea surface, the product interpolates the data. Interpolation is a calculation method for estimating data in regions that fall between points of actual measurement.

"Climate and weather are great dances between the oceans and the global atmosphere," says Bill Patzert, climatologist at NASA's Jet Propulsion Laboratory, Pasadena, Calif. "Sea surface temperature changes control whether these dances are slow and graceful, as with climate, or stormy and violent, as with wild hurricanes and winter storms. Floods, droughts, hurricanes or balmy weather can often be foretold by shifting sea surface temperatures. Sea surface temperatures are a crystal ball that helps us see and plan for the future."

The web page graphics are the result of data from the Advanced Microwave Scanning Radiometer (AMSR-E) instrument that flies aboard NASA's Aqua satellite.

In a normal year, steady winds blow westward and push warm surface water toward the western Pacific Ocean. In contrast, during an El NiÃ±o year, weakened winds allow warm water to occupy the entire tropical Pacific, so scientists look at sea surface temperatures for a signal of El Nino's return. Usually sea surface temperature readings off South America's west coast range from 60 to 70 degrees Fahrenheit (15-21 degrees Celsius), while they exceed 80 degrees Fahrenheit (27 degrees Celsius) in the "warm pool" located in the central and western Pacific. Rainfall tends to follow the warm water eastward, causing drought in Indonesia and Australia and also altering the path of the jet stream - a region of strong winds high in the atmosphere - that helps control weather patterns and storm paths.

La NiÃ±a is characterized by unusually cold ocean temperatures in the central Equatorial Pacific. Sea-surface temperatures along the equator can fall as much as 7 degrees Fahrenheit (4 degrees Celsius) below normal. During La NiÃ±a, the easterly trade winds strengthen and cold upwelling - the transport of colder, deeper waters to the ocean's surface - intensifies along the equator and the West coast of South America. Like her counterpart El Nino, La Nina also changes weather patterns around the world.

Maps of sea surface temperatures and anomalies are highly valuable to ocean and atmospheric scientists. They are one the primary tools climatologists use to monitor and forecast El Nino and La Nina events, and to forecast the frequency and intensity of hurricanes in all oceans.