This is a printer version of an UnderwaterTimes.com article.
To view the article online, visit: http://www.underwatertimes.com/news.php?article_id=10904513872 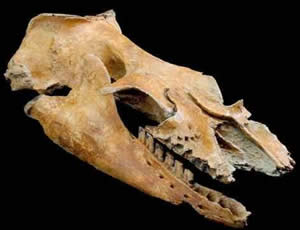 VICTORIA, Australia -- Museum Victoria palaeobiologist Dr Erich Fitzgerald has made new groundbreaking discoveries into the origin of baleen whales, based on a 25 million year old fossil found near Torquay in Victoria.

Dr Fitzgerald's study, which is published in the Zoological Journal of the Linnean Society, is centred on Mammalodon colliveri, a primitive toothed baleen whale, one of a group of whales that includes the largest animal ever to have lived, the blue whale. Although Mammalodon was discovered in 1932 and named in 1939, it has remained relatively unknown until now.

"Through study of Mammalodon, I hypothesise that it was a bottom-feeding mud-sucker that may have used its tongue and short, blunt snout to suck small prey from sand and mud on the seafloor. This indicates early and varied experimentation in the evolution of baleen whales", explained Dr Fitzgerald.

The research conducted by Dr Fitzgerald supports Charles Darwin's speculation in The Origin of Species, that some of the earliest baleen whales may have been suction feeders, and that their mud grubbing served as a precursor to the filter feeding of today's giants of the deep.

Although Mammalodon had a total body length of about 3 metres, it was a bizarre early offshoot from the lineage leading to the 30 metre long blue whale. The new research shows that Mammalodon is a dwarf, having evolved into a relatively tiny form from larger ancestors.

Mammalodon belongs to the same family as Janjucetus hunderi, fossils of which were also found in 25 million year old Oligocene rocks near Torquay in Victoria. This family is unique to south east Australia, their fossils only being discovered in Victoria. "Clearly the seas off southern Australia were a cradle for the evolution of a variety of tiny, weird whales that seem to have lived nowhere else", said Dr Fitzgerald.