This is a printer version of an UnderwaterTimes.com article.
To view the article online, visit: http://www.underwatertimes.com/news.php?article_id=10812530946 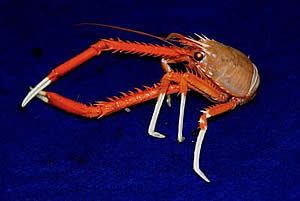 This is a deep-sea crab. Credit: Nova Southeastern University

HOLLYWOOD, Florida -- Some deep-sea crabs have eyes sensitive to ultraviolet light, which they may use to snatch glowing plankton and stuff it in their mouths, a new Nova Southeastern University study suggests.

Tamara Frank, Ph.D., a marine biologist and associate professor at Nova Southeastern University's Oceanographic Center, who is the principal investigator of the study, said that crabs living the deep-sea zone --- a pitch dark area at the ocean bottom ---- may be using bioluminescence to help sort out their food.

Duke University marine biologist SÃ¶nke Johnsen. Ph.D., one of the study's collaborators, explained that the animals might be using their ultraviolet and blue-light sensitivity to sort out the likely toxic corals they're sitting on ---- which glow, producing blue-green and green bioluminescence --- from the plankton they eat, which glow blue.

The sensitivity to shorter ultraviolet wavelengths may give the crabs a form of color vision to guarantee they grab healthy grub, not poison. Frank and her collaborators reported the findings in the Sept. 6 issue of the Journal of Experimental Biology.

Frank has previously shown that certain deep-sea shrimp living in the water column can see ultraviolet wavelengths, even though they live nearly half a mile below the ocean surface, where there's little to no sunlight. Experiments to test deep-sea creatures' sensitivity to light have rarely been done on animals that live on the bottom of the ocean. The new study is one of the first to test how bottom-dwelling animals respond to light.

The team of scientists studied three ocean-bottom sites near The Bahamas. They took video and images of the regions, recording how crustaceans ate and the wavelengths of light, or color, at which neighboring animals glowed by bioluminescence. The scientists also captured and examined the eyes of eight crustaceans found at the sites and several other sites on earlier research cruises.

To capture the crustaceans, the team used the Johnson-Sea-Link submersible. During the dive, crustaceans were gently suctioned into light-tight, temperature-insulated containers. They were brought to the surface, where Frank placed them in holders in her shipboard lab and attached a microelectrode to each of their eyes.

She then flashed different colors and intensities of light at the crustaceans and recorded their eye response with the electrode. From the tests, she discovered that all of the species were extremely sensitive to blue light and two of them were extremely sensitive to both blue and ultraviolet light. The two species sensitive to blue and UV light also used two separate light-sensing channels to make the distinction between the different colors. It's the separate channels that would allow the animals to have a form of color vision, said Johnsen, who is an expert in optics.

During a sub dive, Johnsen used a small, digital camera to capture one of the first true-color images of the bioluminescence of the coral and plankton at the sites. In this "remarkable" image, the coral glows greenish, and the plankton, which is blurred because it's drifting by as it hits the coral, glows blue, he said.

Video of the crabs placidly sitting on a sea pen, periodically picking something off corals and putting it in their mouths, and the data showing the crabs' sensitivity to blue and UV light, suggests that they have the ability color code their food. The idea is "still very much in the hypothesis stage, but it's a good idea," Johnsen said.

To further test the hypothesis, the scientists need to collect more crabs and test the animals' sensitivity to even shorter wavelengths of light. That might be possible, but the team will have to use a different sub, since the Johnson-Sea-Link is no longer available.

Another challenge is to find out whether the way the crabs are acting in the video is natural.

"Our subs, nets and ROVs greatly disturb the animals," Johnsen said. "So we're stuck with what I call forensic biology. We collect information about the animals and the environment, and then try to piece together the most likely story of what happened."

The story looks like deep-sea crabs are color-coding their food, he said.