This is a printer version of an UnderwaterTimes.com article.
To view the article online, visit: http://www.underwatertimes.com/news.php?article_id=10726493158 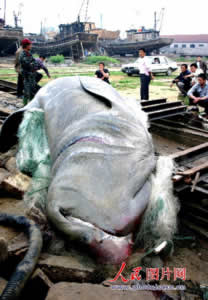 A crane being used to move the massive 5 ton beast 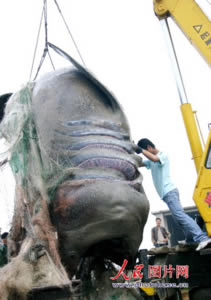 The shark was sold to a passing businessman 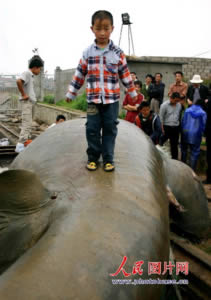 JIANGSU PROVINCE, China -- A giant 'blue' [basking?] shark was captured by a fisher in east China's Jiangsu Province on the afternoon of May 23. The shark was 10 meters long and 1.5 meters wide with a total weight of five tons or so.

The shark was so large, a special crane had to be used to maneuver the beast.

A businessman passing by purchased it at the price of over 100,000 yuan right after the capture.