This is a printer version of an UnderwaterTimes.com article.
To view the article online, visit: http://www.underwatertimes.com/news.php?article_id=10721856403 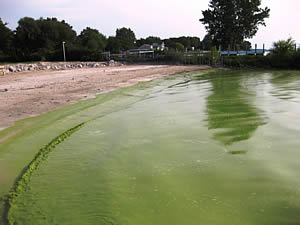 Harmful algae on the shore of Catawaba Island, Ohio.

WASHINGTON, D.C. -- Predicting harmful algal blooms, or HABs, in the Great Lakes is now a reality as NOAA announces an experimental HAB forecast system in Lake Erie. HABs produce toxins that may pose a significant risk to human and animal health through water recreation and may form scum that are unsightly and odorous to beach visitors, impacting the coastal economy. Forecasts depicting current and future locations of blooms, as well as intensity, will alert scientists and managers to possible threats to the Great Lakes beaches and assist in mitigation efforts.

When a harmful bloom in Lake Erie is detected by the experimental system, scientists issue a forecast bulletin to nearby scientists and community managers. The bulletin depicts the HABs’ current location and future movement, as well as categorizes its intensity on a weekly basis.

“With this new forecast, we now have an idea of when and where blooms are predicted to occur and can share products with on-the-ground local managers to reduce the human health threats associated with algal toxins,” said Sonia Joseph, Michigan Sea Grant outreach coordinator for the NOAA Center of Excellence for Great Lakes and Human Health.

“Having a forecast bulletin for Lake Erie will allow us to study the impacts of excess nutrients on beaches and coastal waters, including impacts of harmful algal blooms,” said Jill Lis, environmental health services supervisor for Cuyahoga County, Ohio’s Board of Health.

HABs, such as the blue green algae Microcystis, occur in the waters of almost every coastal state and cost in excess of $82 million annually, including public health, fisheries, and tourism losses. Microcystis blooms are increasing in frequency and duration in the Great Lakes, in part due to the invasive zebra mussel that filters Great Lakes water and removes other algae competitors. These blooms can produce a toxin that can cause skin rashes, liver damage, fish kills, and taste and odor issues in drinking water.

The experimental forecast incorporates data from various ocean-observing systems, including commercial and government satellite imagery obtained by NOAA’s National Ocean Service, coastal forecast modeling and field data by NOAA Great Lakes Environmental Research Laboratory scientists, and reports received from resource managers in the field. The information is then synthesized and interpreted to determine the current and future location and intensity of Microcystis blooms.

“The HAB forecasts for Lake Erie are applying the latest science and technology,” said Rick Stumpf, NOAA oceanographer. “Feedback from the Ohio environmental managers and drinking water utilities will allow us to better forecast these blooms, develop useful tools for our end users, and begin to monitor and forecast blooms in other parts of the country.”

The experimental forecast created for Lake Erie and the state of Ohio was based on the detection system that NOAA’s National Ocean Service designed for Florida's Gulf Coast in 2004. This system will serve as a model for other areas of the U.S. impacted by HABs. The system was jointly funded by NOAA’s Oceans and Human Health Initiative and the Centers for Disease Control and Prevention’s National Center for Environmental Health.