This is a printer version of an UnderwaterTimes.com article.
To view the article online, visit: http://www.underwatertimes.com/news.php?article_id=10672450819 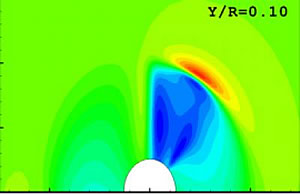 Model results of the water speed around a turbine blade. Currents are slower (blue) behind the blade, and faster (red) at the blade's tip. Credit: UW

SEATTLE, Washington -- The emerging tidal-energy industry is spawning another in its shadow: tidal-energy monitoring. Little is known about tidal turbines' environmental effects and environmentalists, regulators and turbine manufacturers all need more data to allow the industry to grow.

Engineers at the University of Washington have developed a set of numerical models, solved by computers, to study how changing water pressure and speed around turbines affects sediment accumulation and fish health. They will present their findings this week at the American Geophysical Union's meeting in San Francisco.

The current numerical models look at windmill-style turbines that operate in fast-moving tidal channels. The turbine blade design creates a low-pressure region on one side of the blade, similar to an airplane wing. A small fish swimming past the turbine will be pulled along with the current and so will avoid hitting the blade, but might experience a sudden change in pressure.

Teymour Javaherchi, a UW mechanical engineering doctoral student, says his model shows these pressure changes would occur in less than 0.2 seconds, which could be too fast for the fish to adapt.

If the pressure change happens too quickly the fish would be unable to control their buoyancy and, like an inexperienced scuba diver, would either sink to the bottom or float to the surface. During this time the fish would become disoriented and risk being caught by

It's too early to say whether tidal turbines could harm fish in this way, Javaherchi said. The existing model uses the blade geometry from a wind turbine.

"The competition between the companies is very tight and they are hesitant to share the designs," Javaherchi said.

The researchers are open to working with any company that wants to use the technique to assess a particular turbine design.

Another set of numerical modeling looked at whether changes in speed of water flow could affect the settling of suspended particles in a tidal channel. Slower water speeds behind the turbine would allow more particles to sink to the bottom rather than being carried along by the current.

Javaherchi's modeling work suggests this is the case, especially for mid-sized particles of about a half-centimeter in diameter, about two-tenths of an inch. This would mean that a rocky bottom near a tidal turbine might become sandier, which could affect marine life.

The UW research differs from most renewable energy calculations that seek to maximize the amount of energy generated.

"We are [also] interested in the amount of energy that can be extracted by the turbines, but we are aware that the limiting factor for the development of these technologies is the perception by the public that they might have a big environmental impact," said Alberto Aliseda, a UW assistant professor of mechanical engineering and Javaherchi's thesis adviser.

As to whether any negative effects discovered for tidal turbines would be preventable, Aliseda said, "Absolutely."

"We need to establish what is the lowest pressure that the animals can sustain and the period of time that they need to adjust," Aliseda said. "The blade can be shaped to minimize this effect."

Aliseda says engineers in the wind-turbine industry are already adapting the UW work to look at interactions between wind turbines and bats, since high-frequency pressure changes are now thought to be responsible for the mysterious deaths of bats caused by wind turbines.