This is a printer version of an UnderwaterTimes.com article.
To view the article online, visit: http://www.underwatertimes.com/news.php?article_id=10645189702 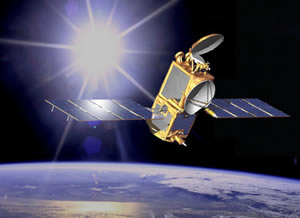 This is an artist's concept of the Ocean Surface Topography Mission/Jason-2 spacecraft in space. Image Credit: NASA/JPL-Caltech

WASHINGTON, D.C. -- Oceanography data that will help scientists around the world better understand climate change are now available. The data come from the Ocean Surface Topography Mission, also known as OSTM/Jason-2, a spacecraft developed jointly by NASA and the French space agency.

Launched June 20, 2008, the mission's first validated data products in support of improved weather, climate and ocean forecasts are now being distributed to the public within a few hours of observation. Beginning in 2009, other data products for climate research will be available a few days to a few weeks after observations are taken by the satellite.

The satellite is monitoring 95 percent of the world's ice-free oceans every 10 days from its low Earth orbit. Like its predecessor satellites, Topex/Poseidon and Jason-1, OSTM/Jason-2 is extending the climate data record by providing a long-term survey of Earth's ocean. It tracks ocean circulation patterns and measures sea-surface height and the rate of sea-level rise, which are critical factors in understanding climate change.

The mission is a joint effort among NASA, the National Oceanic and Atmospheric Administration, or NOAA, France's Centre National d'Etudes Spatiales, or CNES, and the European Organisation for the Exploitation of Meteorological Satellites, or EUMETSAT. An international science team of more than 200 investigators will use data obtained from the satellite's instruments to study the world's ocean and its effect on our society.

"The joint development by NASA and CNES during the past 20 years of an effective technique for measuring sea level from space is a tremendous success story for both agencies and the international science community," said Lee-Lueng Fu, OSTM/Jason-2 project scientist at NASA's Jet Propulsion Laboratory in Pasadena, Calif. "With the successful transition of this important measurement to our partners, NOAA and EUMETSAT, a new era has dawned in humankind's long-term monitoring of this vital barometer of our changing climate.

"Sea level is rising at a rate of 0.13 inches per year, nearly twice as fast as the previous 100 years," said Laury Miller, chief of NOAA's Laboratory for Satellite Altimetry in Silver Spring, Md. "If this rate continues unchanged during the coming decades, it will have a huge impact on erosion and flooding in coastal regions. We need the OSTM/Jason-2 data to help us monitor what is happening."

NOAA will operate the satellite. NASA will evaluate the performance of its instruments: the advanced microwave radiometer, the Global Positioning System payload, and the laser retroreflector assembly. In addition, NASA and CNES will validate scientific data products.

To learn more about the ocean monitoring mission, visit: http://www.nasa.gov/ostm.