This is a printer version of an UnderwaterTimes.com article.
To view the article online, visit: http://www.underwatertimes.com/news.php?article_id=10570139428 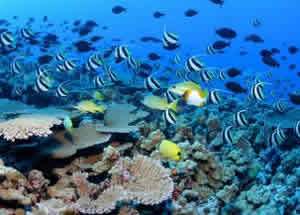 WASHINGTON, D.C. -- More than 245 marine scientists from 35 countries are calling for the establishment of a worldwide system of very large, highly protected marine reserves as 'an essential and long overdue contribution to improving stewardship of the global oceanic environment.'

While small marine reserves are known to protect some species, large reserves comparable to large national parks on land are necessary to better protect sea life in our oceans, which cover 71% of the planet.

By signing the statement, the experts endorsed the scientific case for designating very large, highly protected marine reserves and called on policymakers to take bolder action in establishing these areas. The statement issued by Global Ocean Legacy, a project of the Pew Environment Group, was released on Tuesday for World Oceans Day.

'The need to set aside more and larger marine reserves as one means of ensuring the continued health of our oceans is well accepted among marine scientists, said Dr. Bernard Salvat, noted coral reef scientist and professor emeritus at the University of Paris' Ecole Pratique des Hautes Etudes (EPHE) and the French National Centre for Scientific Research (CNRS). 'We have to work on very large trans-boundary marine protected areas with intergovernmental agreements. We now need to speak out to educate governments and the public about the crisis facing our oceans and the long term benefits of establishing large, no-take marine reserves.'

Overfishing, pollution and climate change are adversely affecting the health of the world's oceans, and ultimately threatening the livelihoods, food security and economic development of millions of people. Very large reserves can help reduce these problems, according to a recently published book, The Unnatural History of the Sea, by Dr. Callum Roberts, who is with the UK University of York.

Less than 0.5 percent of the world's oceans are fully protected from extractive or destructive activities. Large, no-take marine reserves have been shown to blunt the effects of excessive commercial fishing by offering a refuge for sea life to breed and spawn, providing for healthier fisheries as the fish swim into surrounding areas, and thus ensuring more resilient coastal economies. Because the ecosystems in ocean reserves are healthier, they are also more resistant to the damage caused by pollution, climate change and a wide range of other development activities.

'More than a century after nations had the foresight to protect important landscapes like Yellowstone National Park in the United States and Kruger National Park in South Africa, they have just begun to turn their attention to protecting similarly significant places in the sea, said Jay Nelson, director of Global Ocean Legacy. 'The world's leaders need to recognize what more than 245 marine scientists from across the world understand: that the designation of very large, highly protected marine reserves is critical to maintaining the health of the ocean environment.'

Global Ocean Legacy, a project of the Pew Environment Group in partnership with the Oak Foundation, Lyda Hill, the Robertson Foundation and the Sandler Foundation, strives to protect and preserve Earth's most important and unspoiled oceanic ecosystems. Its goal is to work with local citizens and governments to secure the designation of a handful of world class, no-take reserves that will provide ecosystem scale benefits and help conserve the global marine heritage.

A copy of the science statement (available in English and French) as well as additional information about Global Ocean Legacy is available at: www.globaloceanlegacy.org