This is a printer version of an UnderwaterTimes.com article.
To view the article online, visit: http://www.underwatertimes.com/news.php?article_id=10561240378 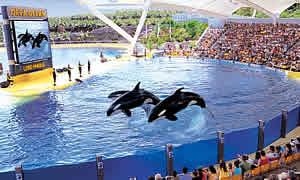 TENERIFE, Spain -- A trainer at Loro Parque, a zoo in the Canary Islans, was accidentally killed by an orca during a training session for a Christmas spectacular planned to open at the beginning of January. The trainer was identified as 29-year-old Alexis MartÃ­nez from Puerto de la Cruz.

Seven other trainers were also present during the training session when Alexis drowned. As far as can be determined, Alexis was hit by the whale and drowned after being underwater for several minutes before he could be rescued.

Alexis was immediately assisted by Loro Parque emergency services. Amidst resuscitation attempts, he was transferred to the Bell Vue Clinic by ambulance, where he was admitted with cardiac arrest. An autopsy will be needed before the precise cause of death can be confirmed.

The news has distressed Loro Parque staff immensely, and the planned Orca show has been suspended for the moment. Alexis had worked at the Parque since 2004, where he was well regarded by his colleagues.