This is a printer version of an UnderwaterTimes.com article.
To view the article online, visit: http://www.underwatertimes.com/news.php?article_id=10539726810 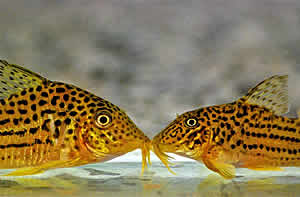 BANGOR, Wales -- Peer into any stream in a South American rainforest and you may well see a small shoal of similar-looking miniature catfish. But don't be fooled into thinking that they are all the same species.

Establishing for the first time that many species are mimetic; that is, they evolve to share the same colour patterns for mutual benefit- the research also established that each individual community of similar looking fish comprised species belonging to different genetic lineages, but still adopting similar colour patterns.

This discovery suggests that in many cases the number of Corydoras catfish species may be higher than previously recognised. This has consequent implications for environmentalists charged with protecting environmental diversity and safeguarding the species.

This increases the challenge of conserving these species at a time when many South American rivers are experiencing large scale development involving damn building, and destruction or contamination of habitats.

Markos Alexandrou, PhD student at Bangor University and one of the paper's authors said: "Although appearing identical in terms of colour pattern, our in-depth assessments of genetic relationships, diet, body shape and colour patterns of the fish revealed that 92% of the communities we sampled comprised species that do not compete for resources.

Claudio Oliveira of project partners, (UNESP, Botucatu, Brazil) said: "Besides the unknown biodiversity and interesting evolutionary system revealed by this study, it reinforces the urgent need to preserve and manage South American environments to avoid the loss of many species yet to be discovered and described."