This is a printer version of an UnderwaterTimes.com article.
To view the article online, visit: http://www.underwatertimes.com/news.php?article_id=10398651470 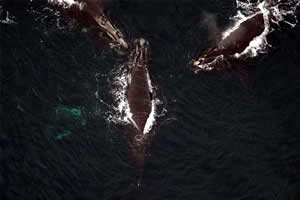 Three North Atlantic right whales are visible at the surface on Jordans Basin. A fourth whale is visible just below the surface at lower left. NOAA

WASHINGTON, D.C. -- A large number of North Atlantic right whales have been seen in the Gulf of Maine in recent days, leading right whale researchers at NOAA’s Northeast Fisheries Science Center to believe they have identified a wintering ground and potentially a breeding ground for this endangered species.

The NEFSC’s aerial survey team saw 44 individual right whales on Dec. 3 in the Jordan Basin area, located about 70 miles south of Bar Harbor, Maine. Weather permitting, the team regularly surveys the waters from Maine to Long Island and offshore 150 miles to the Hague Line (the U.S.-Canadian border), an area about 25,000 square nautical miles.

“We’re excited because seeing 44 right whales together in the Gulf of Maine is a record for the winter months, when daily observations of three to five animals are much more common,” said Tim Cole, who heads the team. “Right whales are baleen whales, and in the winter spend a lot of time diving for food deep in the water column. Seeing so many of them at the surface when we are flying over an area is a bit of luck.”

Just a few days later, on Dec. 6, the team observed only three right whales on Cashes Ledge, about 80 miles east of Gloucester, Mass. Cole says the whales are known to be in the region, but actually seeing them on any given aerial survey is unpredictable. On Dec. 14, the team saw 41 right whales just west of Jordan Basin.

An estimated 100 female North Atlantic right whales head south in winter to give birth in the waters off Florida and Georgia, but little is known about where other individual right whales in the population go in winter, largely due to difficult surveying conditions.

Given the large geographical area over which North Atlantic right whales can occur, Cole and NEFSC colleagues developed an aerial grid system a few years ago for the Gulf of Maine and waters around Cape Cod to ensure complete coverage of the region. The grid resulted in consistent surveys of areas infrequently surveyed in the past, like Jordan Basin and the Great South Channel, and have shown that whales congregate in certain areas at certain times.

With a population estimated to be about 325 whales, knowing where the whales are at any time is critical to protect them. Finding an aggregation of whales can trigger a management action affording protection, such as slowing ship speeds in the vicinity of the whales. On Dec. 9, new federal speed rules for large ships went into effect to reduce ship strikes, to which North Atlantic right whales are particularly vulnerable.