This is a printer version of an UnderwaterTimes.com article.
To view the article online, visit: http://www.underwatertimes.com/news.php?article_id=10346987521 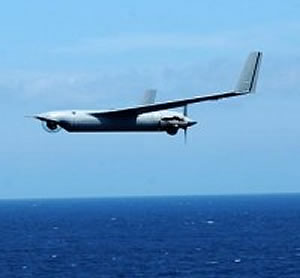 PERTH, Western Australia -- Unmanned aircraft have been zooming around Shark Bay for the past week in Australia's first trial to see whether these military style drones can help us manage and conserve our marine mammals.

"A huge benefit of UAVs is that they eliminate human risk â we don't have to have observers flying low over large areas of ocean in small planes," Dr Hodgson said.

"In addition, they should allow more accurate detection, location and identification of species.

"During this first trial we've focused on dugongs and collected images of them with various camera adjustments. We have been flying the UAV at various heights and air speeds to assess the best way to use this technology to survey dugongs."

The conservation and management of many marine mammal species is largely dependent on monitoring habitat use and population status by conducting aerial surveys from manned aircraft.

Dr Hodgson has been funded more than $400,000 to work with Insitu Pacific over the next three years, based at Murdoch's Centre for Fish and Fisheries Research, to fine tune their UAV camera systems with the objective of improving surveys of dugongs and humpback whales.

These animals have been routinely surveyed for a number of decades in many sites around Australia and the datasets produced have formed the basis for conservation management. Aerial surveys are also used to assess the effectiveness of marine mammal sanctuaries.

Once the camera system is fully developed, Dr Hodgson will be directly comparing the results from traditional manned and UAV surveys of dugongs and humpback whales to test the efficacy of UAV surveys.

"Eventually we hope UAVs will allow us to survey large and remote areas where manned surveys are logistically challenging," she said.

"Large areas of the Australia coastline have never been surveyed for dugongs or humpback whales and UAVs capable of flying long distances may allow us to access these remote areas."

The advantage of the ScanEagle is that it is a low-cost, long-endurance system designed specifically for surveillance and flexible, rapid deployment on land and at sea. It can operate up to an altitude of 20,000 feet for up to 28 hours at a time. Insitu have adapted a camera system especially for marine mammal monitoring.

"We are excited to be exploring the capabilities of our ScanEagle in an animal survey role," said Neil Smith, Insitu Pacific's Project Manager.

"We believe our UAV has a lot to offer when it comes to environmental surveys."

Monitoring marine fauna as part of the regulatory or environmental impact assessment requirements for the oil and gas industry offers a potential niche market for Insitu Pacific, which provides services for defence, civil and commercial applications.

"Although these are early days, this project is great for conservation and it will help with DEC's ongoing obligations for monitoring and conserving marine mammals such as the internationally recognised populations of dugongs and dolphins in Shark Bay," he said.

The Australian Marine Mammal Grants Program, administered by the Antarctic Division of the Australian Government Department of Sustainability, Environment, Water, Population and Communities, was instigated to encourage world leading marine mammal science and accelerate the development of non‑lethal research methods.