This is a printer version of an UnderwaterTimes.com article.
To view the article online, visit: http://www.underwatertimes.com/news.php?article_id=10342057986 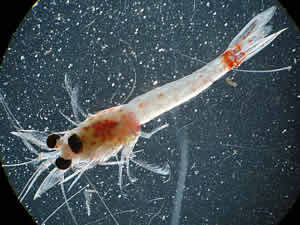 KINGSTON, Ontario -- The latest invader of the Great LakesâHemimysis anomala, or more commonly the bloody red shrimp after its bright red spotsâmay become a new food source for fish, allaying concerns about how it will impact native fish populations.

"Forecasting how an invader will affect the growth and production of a specific native fish species is very relevant to conservation groups and government agencies hoping to conserve those fish," says Biology graduate student Mike Yuille.

Mr. Yuille is the lead author of a study that suggests for the first time that several native fish species have incorporated the bloody red shrimp into their diet over a multi-seasonal period.

In addition to using traditional stomach content analyses, researchers measured the carbon and nitrogen signatures of muscle tissues of three potential Hemimysis predators (round goby, yellow perch, and alewife) to get a long-term picture of eating habits. All three predators exhibited increased nitrogen or carbon signatures, suggesting they had been feeding on prey with signatures very similar to Hemimysis. The team found these signatures in sites with dense populations of bloody red shrimp.

Like zebra mussels, Hemimysis anomala is native to the Black Sea and Caspian Sea. It probably arrived in the Great Lakes through the ballast water of transoceanic ship. In 2006 it was discovered in Lake Michigan and has now been found in all of the Great Lakes except Lake Superior.

These findings will be published in the Journal of Great Lakes Research.