This is a printer version of an UnderwaterTimes.com article.
To view the article online, visit: http://www.underwatertimes.com/news.php?article_id=10310594628 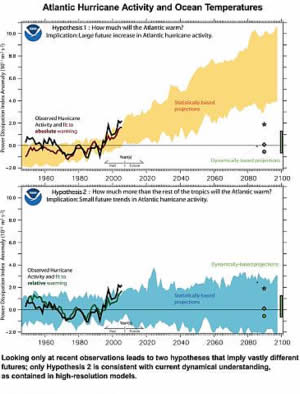 VIRGINIA KEY, Floria -- In a paper published in the journal Science today, scientists Gabriel A. Vecchi of NOAA's Geophysical Fluid Dynamics Laboratory, Kyle L. Swanson of the University of Wisconsin - Milwaukee Atmospheric Sciences Group and Brian J. Soden from the University of Miami's Rosenstiel School of Marine and Atmospheric Science teamed up to study hurricane data observed over more than 50 years. The study explores the relationship between sea surface temperature (SST) and seasonal hurricane activity, and show how differing interpretations of the observational record can imply vastly different futures for Atlantic hurricane activity due to global warming. The two interpretations arise from assumptions of whether it is the local SST in the Atlantic in isolation, or whether it is the SST in the Atlantic 'relative' to the rest of the tropics, that drives variations in Atlantic hurricane activity.

If one assumes the former (the local SST hypothesis), then by 2100, the lower bound on Atlantic hurricane activity is comparable to that of 2005, when four major hurricanes struck the continental United States, causing more than $100 billion in damage. The upper bound exceeds 2005 levels by more than a factor of two. However, if one assumes the latter (the relative SST hypothesis), then the future is similar to the recent past, with periods of higher and lower hurricane activity relative to present-day conditions due to natural climate variability, but with little long-term trend.

The statistical relationship between either interpretation of the SST/hurricane activity link is ambiguous over the period 1946-2007 (they are statistically indistinguishable, though both are significant), but they imply fundamentally different projections for the future and interpretations of the past. The team further argues that the consistency between theory, numerical models, and historical observations offers compelling evidence that the 'relative' SST hypothesis is more accurate and provides a better framework for projections of future changes in hurricane activity.