This is a printer version of an UnderwaterTimes.com article.
To view the article online, visit: http://www.underwatertimes.com/news.php?article_id=10243189605 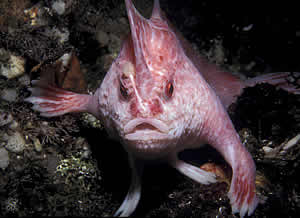 The Pink Handfish is known from only four specimens and was last recorded off the Tasman Peninsula in 1999. credit â Karen Gowlett-Holmes 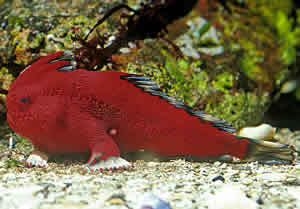 The Red Handfish is listed as vulnerable and is under pressure from habitat degradation and collection. credit â CSIRO 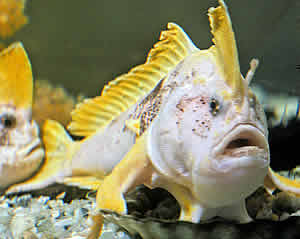 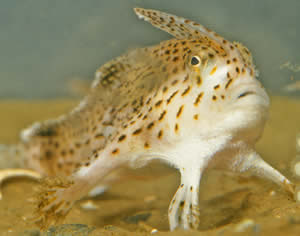 The endangered Spotted Handfish are found on sandy sediments at the bottom of Tasmania's Derwent estuary and adjoining bays. credit â CSIRO

VICTORIA, Australia -- Nine new species of handfish have been described by CSIRO in research that highlights an urgent need to better understand and protect the diversity of life in Australia's oceans.

The new species are described in a review of the handfish family by Hobart-based fish taxonomists from the CSIRO Wealth from Oceans Flagship, Daniel Gledhill and Peter Last.

Supported by funding from the Department of the Environment, Water, Heritage and the Arts, the review of the handfishes brings the family to 14 known species â six found only in Tasmania and one known from only one specimen possibly collected in Tasmania by early European explorers, yet not recorded since. It also deepens concerns about declining populations of some handfishes.

"Handfishes are small, often strikingly patterned or colourful, sedentary fish that tend to 'walk' on the seabed on hand-like fins, rather than swim. Fifty million-years ago, they 'walked' the world's oceans, but now they exist only off eastern and southern Australia," Mr Gledhill says.

"They are of great importance to understanding the origins of Australian marine life, the role of Australia as a refuge during previous periods of change, and the effects on living species of habitat alteration and rapid climate change."

(The Spotted Handfish is listed as endangered under the Environment Protection and Biodiversity Conservation Act 1999 and the Red Handfish and Ziebell's Handfish are listed as vulnerable.)

"There is evidence of shallow-water species disappearing quickly, from being common in certain areas a few decades ago, to apparently being locally extinct in some areas," Dr Last says.

"It's not just two or three handfish species of concern. Our work has described nine new species, each with its own environmental niches and needs, and several of these appear to have very restricted distributions, and/or occur in very low abundance."

Mr Gledhill says the handfishes have proven difficult to classify due to their rarity and a lack of specimens.

One of the newly named species, the Pink Handfish, is known from only four specimens and was last recorded off the Tasman Peninsula in 1999. The Pink Handfish will feature in a photographic exhibition of Australia's marine biodiversity that opens today (21 May) at Questacon in Canberra.

Professor Nic Bax of CSIRO and the University of Tasmania, director of the Marine Biodiversity Hub, says the exhibition offers a wonderful opportunity to acquaint young Australians with the beauty and challenges presented by Australia's vast ocean realm.

"More than half of Australia's territory is ocean, and some 95 per cent of this world is yet to be explored," he says.