This is a printer version of an UnderwaterTimes.com article.
To view the article online, visit: http://www.underwatertimes.com/news.php?article_id=10204138976

Study: Iron Stimulates Blooms Of Toxin-Producing Algae In Open Ocean; 'Easier To Break An Ecosystem Than It Is To Fix One'
Underwatertimes.com News Service
November 8, 2010 18:25 EST 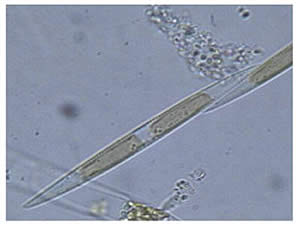 Pseudo-nitschia cells are common in the open ocean. Photo by M. Silver 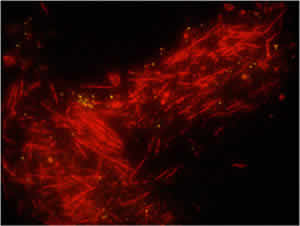 A clump of Pseudo-nitschia cells in a sample of ocean water. Photo by M. Silver

SANTA CRUZ, California -- A team of marine scientists has found that toxin-producing algae once thought to be limited to coastal waters are also common in the open ocean, where the addition of iron from natural or artificial sources can stimulate rapid growth of the harmful algae. The new findings, reported this week in the Proceedings of the National Academy of Sciences, add to concerns about proposals to use iron fertilization of the oceans as a way to combat global warming.

Blooms of diatoms in the genus Pseudo-nitschia, which produce a neurotoxin called domoic acid, are a regular occurrence in coastal waters. During large blooms, the algal toxin enters the food chain, forcing the closure of some fisheries (such as shellfish and sardines) and poisoning marine mammals and birds that feed on contaminated fish. But until now, blooms of these algae in the open ocean have attracted little attention from researchers.

"Normally, Pseudo-nitschia cells are sparse in the open ocean, so they don't have much effect. But these species are incredibly responsive to iron, often becoming dominant in algal blooms that result from iron fertilization. Any iron input might cause a bloom of the cells that make the toxin," said Mary Silver, professor emerita of ocean sciences at the University of California, Santa Cruz, and lead author of the new study.

"This work definitely reveals a wrinkle in those plans," said coauthor Kenneth Coale, director of Moss Landing Marine Laboratories. "It is much easier to break an ecosystem than it is to fix one. In light of these findings, we should redouble our efforts to reduce carbon emissions, the primary culprit for ocean ecosystem damage worldwide."

In 2007, Silver accompanied Ken Bruland, professor of ocean sciences at UCSC, on a research cruise to study iron chemistry in the Gulf of Alaska. She saw Pseudo-nitschia cells often in samples collected at sea, and analysis of the samples back in the lab showed the presence of the domoic acid toxin. Those findings prompted her to team up with Coale to analyze old samples collected during iron-enrichment experiments conducted in 1995 and 2002. Coale was the principal investigator or chief scientist for these studies.

"We thought the toxin would have broken down, but it was still there," Silver said.

In addition to samples from the two iron-enrichment experiments, the researchers analyzed samples from three natural populations in the North Pacific. The results showed that oceanic waters throughout the Pacific contain Pseudo-nitschia populations associated with the domoic acid neurotoxin.

Silver noted that blooms of Pseudo-nitschia must occur naturally in the open ocean as a result of iron deposited by dust storms, volcanic eruptions, and other airborne sources. "It is a natural phenomenon and likely has been for millions of years," she said. "But those are sporadic occurrences. To do iron enrichment on a large scale could be dangerous because, if it causes blooms of Pseudo-nitschia, the toxin might get into the food chain, as it does in the coastal zone."