This is a printer version of an UnderwaterTimes.com article.
To view the article online, visit: http://www.underwatertimes.com/news.php?article_id=10106473528 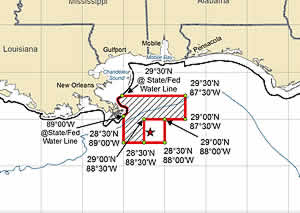 NOAA has announced that it is reopening an area (shaded) of the Gulf of Mexico to royal red shrimping. credit NOAA.

NEW ORLEANS, Louisiana -- NOAA tomorrow will reopen 4,213 square miles of Gulf of Mexico federal waters off Louisiana, Mississippi and Alabama to royal red shrimping. The area was closed to this type of deep water fishing on Nov. 24 as a precautionary measure after a commercial shrimper discovered tar balls in his net. The "fingerprint" analysis to determine whether the source of the tar balls was the Deepwater Horizon/BP oil was inconclusive. Further fish and shrimp sampling and testing from the area showed no oil or dispersant contamination.

This reopening was announced after consultation with the U.S. Food and Drug Administration. All commercial and recreational fishing is allowed within this area.

"Extensive testing of royal red shrimp and other fish from this area revealed they are safe to eat," said Roy Crabtree, assistant NOAA administrator for NOAA's Fisheries Service southeast region. "Seafood safety and consumer confidence remain a priority for NOAA, and we will continue monitoring Gulf seafood for as long as necessary to ensure its integrity."

NOAA continues to work closely with the FDA and the Gulf states to ensure seafood safety. Additionally, the agency is continuing its post-spill broad-scale seafood sampling strategy that includes sampling seafood from inside and outside the closure area.

To date, all seafood tested by NOAA and FDA post-spill demonstrates seafood is safe for consumption. Results from the sensory analysis found no detectable oil or dispersant odors or flavors, and results from the chemical analysis for oil-related compounds and dispersants were well below the levels of concern.

Royal red shrimp are caught in Gulf waters deeper than 600 feet and are the only shrimp species targeted with trawls at these depths. The more common Gulf shrimp species are brown, white and pink shrimp, and are caught in waters less than 300 feet deep. NOAA has not received reports of tar balls in fishing catches at shallower depths in this area.

These waters were initially closed to all commercial and recreational fishing last summer because of the Deepwater Horizon/BP oil spill and were reopened to all fishing on Nov. 15 after hundreds of seafood specimens sampled from the area, including royal red shrimp, passed both sensory and chemical testing. An area covering 1,041 square miles immediately surrounding the wellhead still remains closed to all commercial and recreational fishing. The fishing area closure was first instituted on May 2, at which time it covered about 3 percent (6,817 square miles) of Gulf waters around the wellhead. As oil continued to spill from the wellhead, the area grew in size, peaking at 37 percent (88,522 square miles) of Gulf waters on June 2.