This is a printer version of an UnderwaterTimes.com article.
To view the article online, visit: http://www.underwatertimes.com/news.php?article_id=08679101542 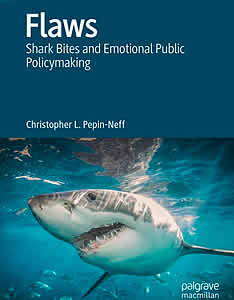 SYDNEY, Australia -- Today, the first book on the "politics of shark attacks" was published by Palgrave Macmillan. The book, Flaws: Shark Bites and Emotional Public Policymaking by Dr. Christopher Pepin-Neff, Senior Lecturer at the University of Sydney, is the first book to look at policy responses to shark bites around the world. Pepin-Neff argues that politicians manipulate highly emotional incidents like shark bites to influence public sentiment and protect their own interests. "This book shows how policymakers manipulate highly emotional situations to make it appear like they are protecting the public and doing 'good' work. The real 'sharks' of this story are the politicians."

Flaws focuses on the 2001 "Summer of the Shark" in Florida that led to a ban on eco-shark tourism in the state, the 2004 adoption of the Shark Spotter Program in Cape Town, South Africa and Sydney's 2009 "Shark Summer" that led to increased funding for aerial patrols. The book includes a report evaluating policy responses to shark bites around the world. This book comes at a time where communities around the world like Cape Cod, Massachusetts are looking for answers to serious and fatal shark bites.

Pepin-Neff adds, "Shark bites can have tragic outcomes that directly affect sections of the public. However, from an objective evidence-based analysis, what we are seeing is not a shark bite response but a theatrical political process, whereby an isolated and individual human tragedy is made worse when these incidents are politicized and sensationalized by the media."

Flaws: Shark Bites and Emotional Public Policymaking identifies three fundamental "flaws" in how we think about sharks. First, is the language. Shark "attack" language is overblown and misplaced because it "conveys a very serious or fatal human-shark interaction, regardless of the details." There may be no injury, or we may be talking about a shark biting a kayak and those are very different things. Second, is the blame. Politicians and the media "treat sharks like movie monsters" and allocate blame that is intended to fear-monger and sell newspapers. Third, is the policy response. Politicians select policy responses "designed to relieve perceived social anxiety and boost public confidence, which often do little to protect the public."