This is a printer version of an UnderwaterTimes.com article.
To view the article online, visit: http://www.underwatertimes.com/news.php?article_id=08256103194

Scientists Fret over Dungeness Crab Caught in Unfamiliar Waters; 'I Thought it was a Joke'
Underwatertimes.com News Service
August 21, 2006 13:19 EST 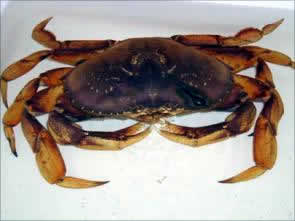 The Dungeness crab, a West Coast species, was caught by Captain Lou Williams off Massachusetts

GLOUCESTER, Massachusetts -- When gill-netter Louis Williams returned to Gloucester late last month with a crab five times larger than anything he normally catches, wholesaler Frank Ciaramitaro thought the fisherman was pulling his leg.

"I thought it was a joke," Ciaramitaro said. "I can't believe it would travel that far."

MIT researchers later confirmed the first sighting of a Dungeness crab in the Atlantic Ocean. The male, whose species is common on North America's West Coast, was caught off Thatcher Island, Massachusetts, on July 19 by Lou Williams, captain of the fishing vessel Orin C.

The origin of the crab is not known. One possibility is that it may have been purchased from a live seafood market and released. The size of the crab (18 cm) and its gender suggest it most likely arrived as an adult exotic species. Also known as invasive species or bioinvaders, exotic species are of concern because they can establish themselves in a new ecosystem, where they can proliferate and push out native species.

The crab was caught while Williams was gillnetting for groundfish at 45 fathoms. Suspecting the crab to be a Dungeness, he took it to Brandy Wilbur, aquaculture specialist for MIT Sea Grant, and Eric Sabo, educator at the Gloucester Maritime Heritage Center, for verification.

Judy Pederson, MIT Sea Grant's manager for coastal resources and an expert on marine invasives, says that the finding of a female crab would have raised greater concerns about the possibility of a marine bioinvasion. In the West Coast fishery for Dungeness crab, only males may be caught and sold. Pederson adds that the chance of two species of crabs cross mating is highly unlikely. However, she points out that the male crab could carry hitchhikers, such as native Pacific barnacles, or diseases that could harm native crustaceans, such as Jonah and rock crabs.

While the crab's method of entry is unknown, Pederson notes that the capture underscores the importance of not releasing any seafood into natural waters. In addition, MIT Sea Grant's Wilbur notes that this finding should put seafood distributors and fishermen on watch.

MIT Sea Grant will be producing and distributing "most wanted" posters to help those who might come across a Dungeness crab identify it and alert authorities.