This is a printer version of an UnderwaterTimes.com article.
To view the article online, visit: http://www.underwatertimes.com/news.php?article_id=08251016794 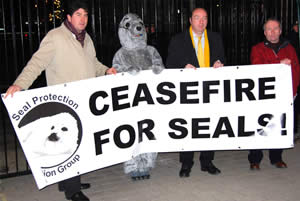 LONDON, UK -- On Tuesday 16th December Liberal Democratic MP for Lewes 'Norman Baker' and Labour MP for Stoke-on-Trent South 'Robert Flello' joined campaigners at 10 Downing Street calling for an immediate and comprehensive ban on the deliberate killing of all seals in UK waters, including Scottish waters.

Under current laws, which are almost 40 years old, fishing interests, including salmon farmers, can shoot seals to prevent supposed damage to their stock. Recent studies show that total numbers of seals in the UK declined by 12% last year, and an estimated 5,000 are shot each year in Scottish waters alone.

Talking about his support for the campaign, Liberal Democrat MP for Lewes, Norman Baker said:

"It is disgraceful that so many seals are still subject to this annual slaughter. The current legislation is woefully outdated and it is vitally important that we immediately amend the law so that seals get the protection they deserve. The government must act."

The campaigners, led by the Seal Protection Action Group unfurled a banner reading 'CEASEFIRE FOR SEALS' and handed in a letter address to Prime Minister Gordon Brown calling for greater protection for our globally important seal populations signed by 28 leading conservation and animal welfare charities.

"It's a disgrace that seals are still tragically slaughtered in parts of the UK and it needs to end" said Labour MP for Stoke-on-Trent South, Rob Flello "There can be no excuse for such barbaric practices and I support the calls to ban this practice and restore the rapidly declining numbers of our common seals."

Last week two fishermen were charged in connection with the brutal clubbing to death of around 20 grey seal pups on a remote island in the Shetlands.

"The horrific clubbing of the seal pups in Shetland is another tragic reminder of the ongoing cruel persecution of the UK's globally important seal populations." said Andy Ottaway of the Seal protection Action Group' "Now scientific evidence supports our view that this culture of killing seals must be stopped before it is too late."

The campaigners have also called on major retailers such as Tesco, Sainsbury's and Marks and Spencer to insist that seals are not shot by their Scottish salmon suppliers. Sainsbury's, the market leaders in Scottish salmon, has recently committed to end seal shooting as quickly as possible.

"We are calling on the British and Scottish Governments to introduce emergency measures to fully protect all our seals from any deliberate killing and to replace outdated legislation with a Protection of Seals Act as quickly as possible. We are also calling on the public to avoid Scottish salmon unless they can be assured that no seals have been killed. Dead seals is too high a price to pay for Scottish salmon"