This is a printer version of an UnderwaterTimes.com article.
To view the article online, visit: http://www.underwatertimes.com/news.php?article_id=07145231089 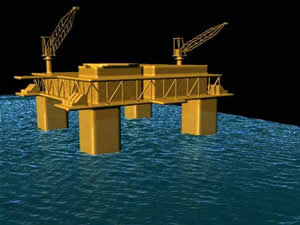 Semi-submersible platform in the ocean. Different mooring systems and materials can be used to tether them to the ocean floor. credit CSIRO 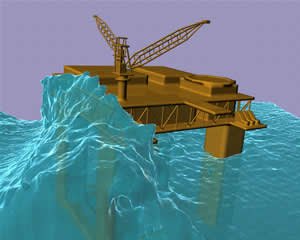 Rogue waves are rare, extreme events that pose a risk to shipping and offshore structures and can lead to loss of life.

They differ from tsunamis, which only grow large when they reach shallow water.

CSIRO scientist and keen surfer, Dr Murray Rudman, said rogue waves were once considered folklore, but wave height monitoring data has blown that myth out of the water.

“Rogue waves are huge waves that sometimes seem to come out of nowhere and, in recent years, they’ve been a major topic of scientific research,” Dr Rudman said.

CSIRO is using fluid-flow mathematics and computer modeling to assist in the sensible and safe design of oil platforms.

“Waves are extremely difficult to predict, especially when they begin to break,” Dr Rudman said. “Also, the movement of the wave and the oil platform influence each other in complex ways.

“We use a mathematical technique called Smoothed Particle Hydrodynamics originally developed in astrophysics to model stars forming and galaxies exploding.

“In CSIRO, we’ve extended the methods to a whole range of industrial applications.”

Using the technique on a computer, the researchers can create a realistic rogue wave and pound the four legs and platform of the oil rig, which is floating on the ocean but tethered to the ocean floor by cables.

Various cable mooring systems and materials can be compared.

The computer measures the movement of the platform in many different directions over a particular time period to see how well the moorings hold.

The results show the forces the wave impact generates on the structure and cables to see if anything breaks. Researchers can even see what happens when an oil rig capsizes.