This is a printer version of an UnderwaterTimes.com article.
To view the article online, visit: http://www.underwatertimes.com/news.php?article_id=07110853642 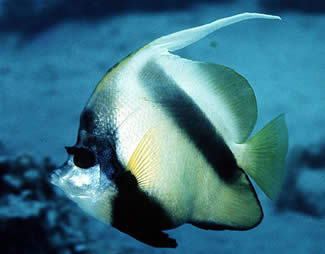 The native Red Sea Bannerfish was recently found off the coast of Florida. Photo by John Randall

The Red Sea Bannerfish (Heniochus intermedius) is native to the Red Sea in the Middle East, but is sold in the U.S. as a saltwater aquarium fish. It is one of several exotic aquarium fish species that have been photographed or captured in recent years living on reefs off southern Florida. Although this fish is not harmful to humans, it could interfere with the food web and affect species of economic value if it becomes a dominant species on the reef.

NOAA has received numerous reports that aquarium fish have been released from personal aquaria into Florida waters. NOAA scientists are analyzing the impact of such releases on native ecosystems and fisheries. Thus far, they have determined that the Red Sea Bannerfish could pose a danger because of its wide dietary habits, which could allow the fish to survive and multiply. Scientists are assessing the risk of the Bannerfish altering the ecological balance of invaded ecosystems using information from taxonomic studies and monitoring.

"The President's Ocean Action Plan details how important education on aquatic invasive species is in increasing public awareness about the importance of prevention," said retired Navy Vice Admiral Conrad C. Lautenbacher, Ph.D., undersecretary of commerce for oceans and atmosphere and NOAA administrator. "Non-native plants and animals, including those in the aquarium trade, can cause irreparable harm to the environment and can damage recreational and commercial uses of our aquatic resources. A specific recommendation of the Ocean Action Plan is support of the Habitattitude partnership, which promotes a cooperative conservation approach to preventing further introductions of non-native species into our waterways."

Once a non-native species becomes established in the sea and affects the local ecosystem, it is often too late to apply control measures. The Red Lionfish is a prime example. First reported in the Atlantic off coastal Florida in 2002, this venomous species has now spread as far north as Long Island. Another example is the aquarium algae Caulerpa brachypus that was introduced to southeast Florida reefs and is now causing dire ecological impacts by smothering corals and other sea life. Billions of dollars of economic damage can be caused by invasive species each year.

"The system has been a great tool to get the word out quickly about new introductions," said Pam Fuller, program leader for the USGS Nonindigenous Aquatic Species program at the Florida Caribbean Science Center in Gainesville, Fla. "Cooperation between USGS and NOAA will expand our ability to use our citizens' observations to protect our ecosystems and prevent economic losses."

NOAA's Red Sea Bannerfish bulletin includes suggestions of how citizens can play an important role in the prevention and detection of aquatic invasive species including: